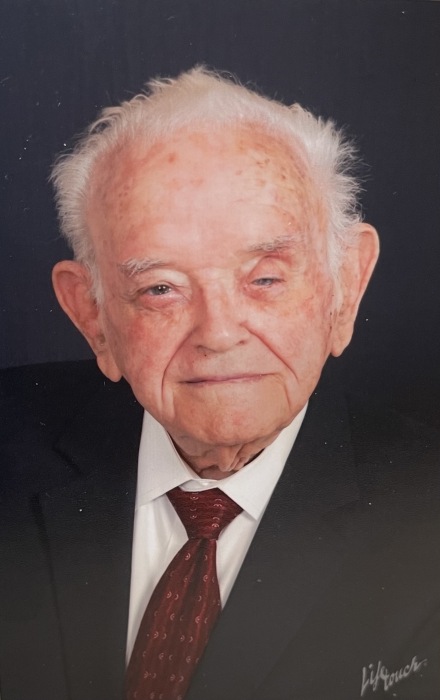 Willis “Merle” Jolliff 96, of Peoria passed away on January 14, 2021 at Proctor Hospital. He was born on December 22, 1924 in Cooksville, IL. Son of the late Rosco and Ferne (Scott) Jolliff. He married C. Cosette DeMaster on June 5, 1976 in Peoria where he resided for the last 30 years. She survives.

Merle was raised on a family farm in Mclean County. After high school he proudly served in the U.S. Army during the Korean War. He then went to Bradley University and obtained a Master’s in Business Administration. In 1948 Merle partnered with his Father Rosco and his brother Don to own and Operate R.S. Jolliff & Sons John Deere Dealership in Lacon, IL. Merle and Don operated R.S. Jolliff & Sons John Deere dealership for over 40 years.  Merle and Don traveled the country buying and selling Antique Tractors and Implements for their immense Agriculture collection.

In his early years, Merle was an avid skier and enjoyed skiing every year in Colorado or Switzerland. He and his parents were supporters of the South Side Mission for decades. Merle was a member of the Rotary Club of Lacon and many other charitable organizations. He will be remembered as a caring friend to everyone he met. Merle was a devoted Christian and avid supporter of Grace Presbyterian Church.

He was preceded in death by his parents, brother Donald Jolliff, sister Phyllis Bottles and stepson Clay DeMaster.

The family wishes to thank Larry Reinbeck, Jonna Kraus and Lisa Scott for their support to Merle and Cosette. The family would like to recognize his Dunkin Donuts Coffee Club friends who gave him great joy. Merle never met a stranger and assisted countless farm families throughout Central IL. He will be duly missed and not soon forgotten.

Cremation rites have been entrusted to Cumerford-Clary Funeral Home in Peoria. A memorial service will be held at a later date.

Online tributes and condolences may be made at www.cumerfordclary.com. Memorial contributions in Merle’s honor may be directed to South Side Misson.

To send flowers to the family or plant a tree in memory of Willis "Merle" Jolliff, please visit our floral store.

To send flowers to the family in memory of Willis "Merle" Jolliff, please visit our flower store.