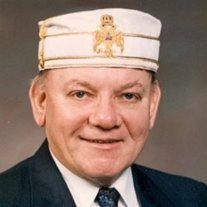 "Plan your work and work your plan." That was Bill's motto, and he lived it. Born into poverty, Bill took a paper route at age 12 and never looked back. After serving in the 82nd Airborne Division from 1942-1946, he founded the McDaniels Insurance Agency at Illinois Mutual, which has been serving Peoria for over 54 years. Bill was raised as a Master Mason in 1952 through the Joseph Robbins Lodge #930 of Peoria and later transferred to Grandview lodge #1112 of Peoria. He joined the Scottish Rite in 1961 and was a Life Member. Bill served as Co-Chairman of the Fundraising Campaign for the library and museum from 1977-1979, served as General Chairman of Council of Deliberation in 1982, 1984 and 1991 and was the Membership Chairman from 1984-1986. Bill received the 33o in 1985. While serving as Valley of Peoria Commander-in-Chief from 1988-1990, he started Family Life Week. He created the foundation which will preserve an important Peoria landmark, the Scottish Rite Cathedral, and he served as chairman of its investment committee from 2007-2013.

Bill joined the Mohammed Shrine in 1965 and became president of its Kiltie Bagpipe Band in 1972. He also was membership chairman for the Mohammed Shrine from 1975-1976, adding 458 new members. Bill was very involved in the community. He joined the Peoria Jaycees in 1954. Bill served a Chairman of the Peoria Jaycees Soap Box Derby in 1957, received the Jaycee Key Man Award in 1958, served as President of the Peoria Jaycees from 1958-1959, and was the Illinois Jaycees Vice-President in 1960. He was elected National Director of the United States Jaycees in 1962. He received the "Outstanding Young Man of the Year" award for the city of Peoria in 1962. Bill served on the Greater Peoria Mass transit District Board of Trustees from 1955-1999, was a member of the Peoria Life Underwriters for 51 years, was elected to the Life Underwriters Board of Directors from 1963-1966, and served as its President in 1967. Bill was named as one of Illinois' Outstanding Young Men in 1976.

Bill was an avid sports fan especially the Chicago Bears and Chicago Cubs. He enjoyed going to his lunch group at Proctor Hospital. Bill enjoyed traveling with his wife, Lu, throughout the world with groups from Illinois Mutual, the Shrine and the Scottish Rite. Bill and Lu's favorite vacation spot was their annual trip to Panama City. Bill has resided with Gary and Bev for the last year and a half. Bill was a great man and his words of wisdom will always be treasured by his family. He will be greatly missed.

A memorial service will be held on Thursday, March 28, 2013 at 12pm the Historic Scottish Rite Cathedral, 400 NE Perry Avenue, Peoria. Rev. Mary Jane West will be officiating. Visitation will also be held on Thursday from 9am to 11:30am. Lunch will be served in the banquet hall following the memorial service. Cremation rites will be accorded and burial will take place at Swan Lake Memory Gardens. Memorials may be made to the Scottish Rite 501-C3 Foundation. Online condolences may be made through www.hurdfamilyfunerals.com


To send flowers to the family or plant a tree in memory of William "Bill" H. McDaniels, please visit our floral store.

To send flowers to the family in memory of William McDaniels, please visit our flower store.