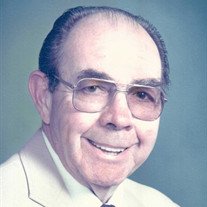 Dr. William (Bill) Hamilton Hart of Peoria, 95, was called home to be with the Lord on Saturday, April 26, 2014 at Unity Point Health Methodist in Peoria.
Bill was born on April 10, 1919 in Peoria, Illinois to Roscoe Dean and Grace Pearce Hart. He was a life-long member of the First Baptist Church in Peoria. He married Virginia S. Fangrat in 1943. Together, they raised 5 children and in 1970, decided to increase their family by adopting a son and daughter from Vietnam. In 1982, he married Jeanette A. McCammon.
He is survived by his wife Jeanette and his 6 children: Ginny (Jerry) Halverson of East Peoria; Diane (Dick) Hofer of Princeville; Debbie (Tom) Mead of Peoria, Patty (Frank) Howell of Argyle, Texas; Tim (Chris) Hart of Peoria and Kim (Mark) Barrick of Peoria. He also leaves 12 grandchildren and 10 great-grandchildren. He was preceded in death by his parents, 2 brothers, 1 sister, his son William, and his grandson Jordan Barrick.
Upon graduation from Peoria High School, Bill entered Bradley University. He later transferred to the University of Illinois and received his medical training at the University of Illinois Medical School in Chicago. Bill's education was interrupted during World War II when he was called to serve in the Medical Corps of the U.S. Army. He was stationed in England and Germany. After the war, he completed his internship and residency in general surgery. He went into private practice with Dr. Loren Whittaker, forming Whittaker and Hart Surgical Associates and remained in practice for 43 years.
His entire life was dedicated to helping others. He served with his brother, Dr. Robert D. Hart as Peoria High's team physician for 43 years and was honored as the first co-recipient of the Team Physician Award for service rendered to high school teams of Illinois. He also developed and implemented the first academically based EMT training program in the Peoria area. After retirement, Bill remained involved in various community activities, including the Red Cross and the District 150 mentoring program. His participation continued into his 90's.
Visitation will be held at Cumerford-Hurd Funeral Home located at 428 West McClure Avenue in Peoria on Tuesday, April 29, 2014 from 4:00pm to 8:00pm. Cremation rites have been accorded. Private interment will be at Resurrection Cemetery at a later date.
Memorials may be made to First Baptist Church or the American Heart Association.
Bill's online memorial may be viewed at www.hurdfamilyfunerals.com


To send flowers to the family or plant a tree in memory of William Hamilton (Bill) Hart, please visit our floral store.

To send flowers to the family in memory of William Hart, please visit our flower store.