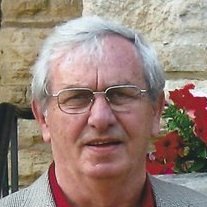 William "Bill" Charles Van Ausdall, Sr., 70, of Dahinda, Illinois passed away Saturday June 8, 2013 at his home.
A memorial service will be held at Cumerford-Hurd Funeral Home in Peoria, on Wednesday June 12 at 12:00 noon. Pastor Sammy Waller will officiate. Visitation will be held from 10:00 AM until the time of service.
William was born in Peoria, Il to Clarence and Dorthea (Carol) Van Ausdall. He married Margaret Snell on October 26, 1962. She survives. William and Margaret recently celebrated 50 years of marriage last October.
He is survived by four children, William Van Ausdall, Jr. of Bellevue, Il, Debra Van Ausdall of Canton, Il, Gregory (Amy) Van Ausdall of Hannah City, Il, Kimberly Van Ausdall of Streator, Il, eight grand children, and two great grandchildren.
Bill served his country in the United States Air National Guard as a fulltime civilian technician. In the Air Guard, he served in the Aircrew Life Support section, ensuring all flight equipment was in perfect working order including everything from flight helmets to parachutes. He was a Vietnam War Veteran. He retired after 38 years in 1998.
He was a member of the VFW in Knoxville, Il and St. Johns Catholic Church in Williamsfield.
Memorial donations in Williams honor may be made to OSF Hospice - Peoria. 2205 W. Altorfer Drive, Peoria, Il 61605.


To send flowers to the family or plant a tree in memory of William "Bill" Van Ausdall, please visit our floral store.

To send flowers to the family in memory of William Ausdall, please visit our flower store.