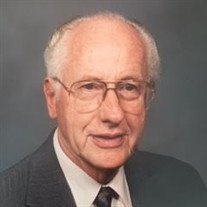 Wayne Blair Dimmick, 88, of Peoria passed away following a brief illness on October 13, 2015 at Lutheran Hillside Village, where he and his wife of 67 years, Gloria, have resided for the last 12 years. Wayne Dimmick was born on November 11, 1926 in Peoria and was preceded in death by his parents Blees and Martha Dimmick of Peoria. Wayne had one sister, Marilyn Dimmick (Bill) Davis (Louisville, KY). He attended Peoria public schools and Bradley University for a brief time prior to entering the Navy in December of 1944. He served as a sonarman, 3rd class, and received an honorable discharge in July of 1946. Upon returning home from the service, he completed a Bachelor of Science degree in engineering, with a minor in education. Over the next several decades he completed a Masters in Education from Bradley, and an Educational Specialist degree from Western Illinois University.
He was active in Phi Sigma Kappa, a national music fraternity, and he kept up his interest in piano throughout his life, having taken lessons from a young age. Wayne also had a powerful bass voice and sang in many ensembles and choruses, as well as his church choir. He married Gloria Chapman in 1948 at Madison Avenue Methodist Church in Peoria. The couple had 3 children, Deborah Dimmick Smith, PhD (Kingston, Ontario, Canada), Rodney Dimmick (St. Louis, MO), and Darrell Dimmick (Chicago, IL).
For over 35 years, Wayne was a principal and later school superintendent in a number of central Illinois schools including Riverview Elementary (East Peoria), Roosevelt Junior High (Peoria), Greenview, Wenona, Creve Coeur, and Chandlerville Schools, as well as the Hebrew Day School (Peoria). Previous to becoming a school administrator, he taught auto mechanics at Normandy Junior High near St. Louis, and math at Roosevelt Junior High (Peoria). He was instrumental in organizing a community effort to consolidate the one-room schools in Spring Bay to form Riverview Elementary School. Wayne obtained the donation of a 10 acre tract of land on which the school was built, drew up the plans for the school, and supervised the building prior to his appointment as principal at Riverview. Wayne and his wife built a home just across the road from the school. They also ran a produce farm called "Gloraway Acres", raised goats, and sold produce, particularly Hearts of Gold cantaloupe.
He was a loving grandfather to Aaron Smith (Alicia Jay) of Elmsford, NY, Blair Dimmick of Bowling Green, KY, Charlotte Beck (Tim) of Washington, and Grant Dimmick (Tiffany) of Industry. Wayne also had three great-grandchildren, Lily and William Beck of Washington and Owen Dimmick, of Industry. Wayne was known for his congenial manner, and his interest in family connections and genealogy, tracing his Puritan roots back to the 1500's. He loved playing his home organ at family get-togethers or watching the children (including his three nephews (John (Lois) Caldwell (Camarillo, CA), Bruce (Kathy) Davis (Columbus, GA), and Brent (Kristy) Davis (Louisville, KY) swim and fish at the family's lakefront property. He also organized family travel trailer vacations, often including his mother Martha on these trips, to destinations including New York, Canada, California and Washington state.
Wayne was a long-time member of Rotary International and the American Legion, and often led these groups in song with his commanding voice and spirited piano accompaniment. He thoroughly enjoyed many types of music, but had a particular passion for big band and Broadway tunes, as well as gospel hymns. He will be sadly missed and fondly remembered by his wife, his children, grandchildren, great-grandchildren, his sister, and other extended family members, as well as the multitude of students whose lives he has touched over the years with his innovative ideas as an educator, always encouraging students to explore a wide array of interests, including sports, music, art and theatre, and to continue in their educational pursuits.
A funeral service for Wayne will be held at First United Methodist Church, 116 NE Perry Avenue in Peoria on Monday, October 19, 2015 at 11:00 AM. The Rev. Dr. Bob Phillips will officiate. Visitation will be held one hour prior to the service time at the church. Interment will be held following the service in Springdale Cemetery.
In lieu of flowers, memorials in honor of Wayne may be made to First United Methodist Church Peoria or a charity of the donor's choice.
Wayne's online memorial website may be viewed at www.cumerford.com.

To send flowers to the family or plant a tree in memory of Wayne Blair Dimmick, please visit our floral store.

To send flowers to the family in memory of Wayne Dimmick, please visit our flower store.