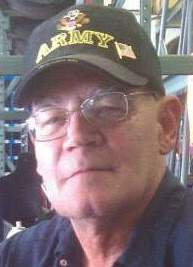 
Timothy Lee Frazee, 67, of Morton passed away, with family by his side, at 10:36 p.m. on Sunday, March 1, 2015, at OSF Saint Francis Medical Center in Peoria.
Tim was born on February 28, 1948 in Peoria, a son of Jesse J. Frazee and Elizabeth J. (Cage) Frazee. He was the third of six children. Tim had been employed with Caterpillar for many years, held numerous construction jobs and eventually became sole proprietor of Tim’s Kar Kare, until he retired.
Tim served in the United States Army as an SP4 Technician and was awarded the National Defense Service Medal and Sharpshooter M-14 badge. He took major pride in his service to his country and being a Veteran.
Tim was preceded in death by his mother, two nieces and two nephews. He is survived by a daughter, whom he loved, admired and respected, Wendy Frazee of Peoria; his father, Jesse J. Frazee, 93, of East Peoria; siblings, Suzan (Frazee) and Mike Taylor of East Peoria, Jack and Shirley Frazee of Springfield, NE, Ned and Kay Frazee of Peoria, Mike Frazee of Morton, Joe and Linda Frazee of Olathe, KS; numerous nieces, nephews and countless friends. To Tim, if you were a friend, you were family.
Tim had a love for nature and enjoyed fishing. Although he was fond of all animals, dogs were his favorite. Even Scooby Doo was his most cherished cartoon character. He never met a dog he couldn’t teach a trick. If there was ever a quiet dog, he would soon train it to sit, speak and of course, drink beer.
Legend has it, that Tim may have co-invented the "pull my finger" joke, as he was not only a master practitioner, but also a connoisseur of the art of flatulence. Tim was also an avid NASCAR fan. His favorite driver was Mark Martin, but he also cheered on Danica Patrick. With a gleam in his eye, Tim loved to hate on Jeff Gordon, just to aggravate his nephew, Gary Scharp.
If you had a need or problem, Tim would find a way to fill it or fix it. He was a man of many talents, endless knowledge and liked to wire "HOT". Although he was not one to be snuck up on or startled, laughter and jokes were always in abundance, when Tim was present. He was extremely giving of himself, his time, hard work, his love, knowledge and uncanny ability to help solve any troubles you may have had, through his endless connections.
Celebration of Tim's life will be held daily at Schooner’s in Morton, as well as an official gathering on Tuesday, March 10, 2015, from 5 to 8 p.m. Please come enjoy a "Scooby Snack"!
Cremation rites have been accorded and interment, with Military Honors by the Inter-Veterans Burial Detail of Sangamon County, will be at Camp Butler National Cemetery in Springfield, at a later date to be announced.
In lieu of flowers, please contribute to any Veteran’s program or local animal charity, in his memory.
Arrangements have been entrusted to Clary Funeral Home, 3004 West Lake Avenue, in Peoria.


To send flowers to the family or plant a tree in memory of Timothy Frazee, please visit our floral store.