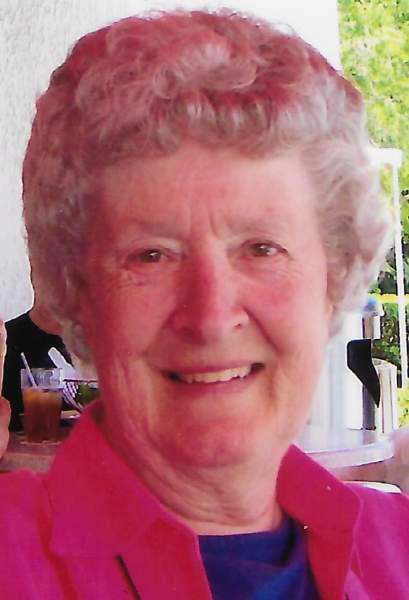 Theo M. Krause, 82, of Peoria, passed away on Saturday, July 11, 2015, at OSF St. Francis Medical Center in Peoria.
Funeral services will be at 11 a.m. on Thursday, July 16, 2015, at Clary Funeral Home, 3004 West Lake Avenue in Peoria, with Pastor Pat Monroe officiating. Visitation will be from 5 to 7 p.m. on Wednesday, July 15, 2015, at the funeral home. Interment will be at Lutheran Cemetery in Peoria.
Theo was born in Peoria on October 2, 1932, the daughter of Theodore and Dorothy (Schaer) Schonwise. After graduating from Woodruff High School, she worked as an accountant at Central Illinois Light Company.
She married Warren F. Krause on December 12, 1952. After Warren returned from his Army service, she worked with him on Krause Farm and enjoyed sixty-two years of marriage. She was well-known and remembered by many for selling Krause Veggies at the Metro Farmers Market. She was also known for making beautiful Christmas ceramics. She and Warren enjoyed their many trips around the U.S., including Hawaii, Europe, Australia and Mexico.
Theo is survived by her husband, of Peoria; son, Steven F. (Deb) Krause; grandson, Eric L. Krause; step-granddaughters, Nicole Anderson and Lauren Faughn; and step great-grandson, Lochlan Faughn. She was preceded in death by her parents and brothers, Homer and Carl Schonwise.
She enjoyed ceramics, crafts, crocheting, 3D photos, chenille and feather flower arrangements, Elvis, Red Lobster, St. Louis Cardinals baseball, Pittsburgh Steelers football and decorating for Christmas. As a teenager, she participated in piano recitals and was an instructor, though Warren never heard her play. She was very smart and feisty.
Memorial contributions may be made to Lutheran Hillside Village or to the American Red Cross.


To send flowers to the family or plant a tree in memory of Theo Krause, please visit our floral store.