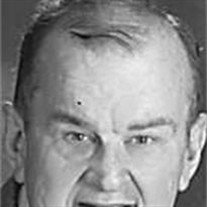 Stephen Charles Rogers, 65, of Peoria passed away unexpectedly on April 13, 2014.

Stephen graduated from Richwoods High School and went on to study at Bradley University. He graduated with a Bachelor's degree.

Steve always enjoyed spending time with his cousins and close friends. He was a loving and caring brother, uncle, and son, who will be truly missed.

Stephen was a member of the First United Methodist Church in Peoria, where he served as an usher for many years. He was a former member of both American Legion Post #2 and Toast Masters.

Funeral will be held at Cumerford-Hurd Funeral Home, located at 428 West McClure Avenue in Peoria at 1:00pm on Wednesday, April 16, 2014. Pastor Bob Phillips will officiate. Visitation will be held one hour prior to the service. Burial will take place in Prospect Cemetery.

Memorials in honor of Stephen may be made to the First United Methodist Church.

Stephen's online memorial may be viewed at www.hurdfamilyfunerals.com

To send flowers to the family or plant a tree in memory of Stephen Rogers, please visit our floral store.

To send flowers to the family in memory of Stephen Rogers, please visit our flower store.