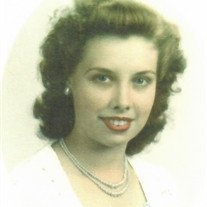 Shirley M. Hudson, 92, of Peoria passed away on Tuesday, March 22, 2016 at Pekin Hospital.
Shirley was born August 25, 1923 in Peoria, Illinois to Vada White and Charles Southard. She married Harold Hudson on July 27, 1957. He preceded her in death on August 27, 1980.
Surviving are one son, Charles (Betty) Jenkins of Peoria; one daughter, Linda-Kay (Martin) Vasterling of Pekin; two grandchildren, Barbara Hamdan and Daniel Jenkins; four great-grandchildren, and one great-great-grandchild.
Shirley was a homemaker, but also worked as a laborer for Caterpillar, Bemis Bag, and Murison Labels during her lifetime.
She loved shopping, animals, collecting, and crafting (including crocheting, quilting, dolls, sock monkeys, and ceramics).
A funeral will be held for Shirley on Wednesday, March 30, 2016 at 1:00 pm at Cumerford-Hurd Funeral Home in Peoria. Visitation will be one hour prior to the service time at the funeral home. Burial will be at Parkview Cemetery.
Shirley's online memorial may be viewed at www.cumerford.com


To send flowers to the family or plant a tree in memory of Shirley Mae Hudson, please visit our floral store.

To send flowers to the family in memory of Shirley Hudson, please visit our flower store.