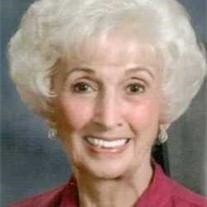 CHILLICOTHE - Sherrilyn R. Bolding, 76, of Chillicothe passed away at 3:30 a.m. Saturday, May 14, 2011, at her residence.
She was born March 20, 1935, in Peoria, Illinois, to Aman and Ruth (Root) Kehlenbach. She married Lloyd W. Bolding on Aug. 31, 1957, in Chillicothe.
Surviving are her husband; two sons, Michael Bolding of Scottsdale, Ariz., and Mark (Nina) Bolding of Hollywood, Fla.; one daughter, Laurie (Don) Capron of Chillicothe; and five grandchildren. Also surviving are one sister, Joanne (Robert) Houser of Dolores, Colo.; and one brother, Harold "Kel" (Sue) Kehlenbach of Chillicothe.
She was preceded in death by her parents.
Sherrilyn worked at First National Bank of Chillicothe for 23 years.
She was a member of Arrowhead Country Club and Pearce Community Center. She was a former member of Chillicothe Jr. Women's Club.
She was a member of First United Methodist Church of Chillicothe. She was a former member of the church choir and was children's choir accompanist for several years.
Visitation will be from 5 to 7 p.m. Monday, May 16, 2011, at Weber-Hurd Funeral Home in Chillicothe. Funeral service will be at 11 a.m. Tuesday, May 17, 2011, at First United Methodist Church in Chillicothe. The Rev. Ted Mitchell will officiate. Burial will be in the Chillicothe City Cemetery.
Memorials may be made to her church.

To send flowers to the family or plant a tree in memory of Sherrilyn R Bolding, please visit our floral store.

To send flowers to the family in memory of Sherrilyn Bolding, please visit our flower store.