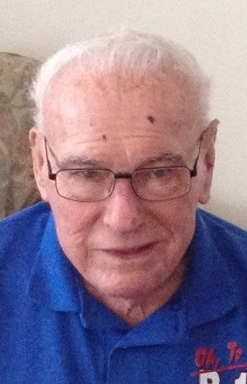 Samuel R. “Sam” Simms Sr., 90, of West Peoria, passed away at 2:25 p.m. on Tuesday, March 18, 2014, at Proctor Hospital in Peoria.
Memorial services will be at 11 a.m. on Friday, March 21, 2014, at Clary Funeral Home, 3004 West Lake Avenue in Peoria, with the Rev. Dean Grabill officiating. Interment will be at Fondulac Cemetery in East Peoria, at a later date.
Sam was born on March 2, 1924 in Creve Coeur, the son of Robert and Eliza (Rothwell) Simms. They preceded him in death, along with three sisters, Ann Sisk, Alice Salter and Jane White; and his son-in-law, Tom Yentes. He married Helen L. Wilson on January 7, 1950 in Peoria. She survives.
He is also survived by his son, Samuel R. Simms Jr. (Jennifer) of Iola, WI; daughters, Nancy Simms of Sun City, AZ and Kathy Yentes of West Peoria; granddaughters, Christy Martin (Rob) of Germantown Hills and Hope (Brian) Enslow of McHenry; great granddaughters, Hillary, Hayleigh and Hannah Enslow; and great grandsons, Mike and Jake Martin.
Sam graduated from East Peoria High School and enlisted in the Army Air Corps on November 3, 1942 in Peoria. He was Top Turret Gunner on B-17 aircraft, serving in the Central Europe Air Offensive. He was honorably discharged as a Technical Sergeant on August 29, 1945 at Ft. Sheridan, earning the Air Medal, four Bronze Oak Leaf Clusters, the Distinguished Flying Cross and the European African Middle Eastern Theatre Ribbon with two Bronze Stars.
He retired, after fifty years of service, with E.M. Smith Co. in Peoria, last working as a sales representative. After his retirement, he was employed with the Peoria Park District at Donovan and Newman Golf Courses.
Sam was a member of the Frank D. Nichol Masonic Lodge #1170 A.F. & A.M. in Creve Coeur, Scottish Rite Valley of Peoria Consistory, Mohammed Temple Shrine and Benevolent and Protective Order of Elks Lodge #20 in Peoria.
He enjoyed golfing with his fellow Elks members; watching all sports, especially the Chicago Bears, Chicago Cubs and Phil Mickelson golfing; and listening to Big Band music and Danny O’Donnell. He was a proud veteran and was an Honor Flight participant in September of 2011. He will be remembered as a loving husband, father, grandfather and great grandpa.
In lieu of flowers, memorial contributions may be made to Illinois Elk’s Children Care Corporation, Shriners Hospitals of Children or the Scottish Rite Valley of Peoria Consistory.


To send flowers to the family or plant a tree in memory of Samuel Simms, Sr., please visit our floral store.