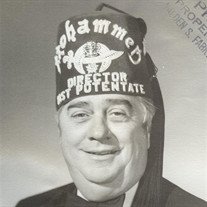 Robert F. "Bob" Voss, 93, of Peoria, passed away on Sunday, May 4, 2014, at Bickford House in Peoria.
He was born to Edwin R. and Hazel (Davison) Voss on August 31, 1920, in Peoria. He married Frances Jones on April 16, 1943, in Miami Beach, Florida. She preceded him in death on April 13, 2005.
He is survived by his one daughter, Nancy (Michael) Stone of Dunlap,IL, one granddaughter, Emily (Brice) Lahl of Palatine, IL, one grandson, Ryan Stone of Dunlap, IL, two great-grandchildren, Claire Lahl and Beau Lahl of Palatine, IL, two nieces, Kathy Wessel of Wheaton, IL, and Carol (Don) Lehman of Gardner, KS, and one great-niece, Sheree (Michel) Click of Washington, IL. Bob was preceded in death by his parents, one sister, Marie Wessel, one brother, Edwin L. Voss, and a nephew, David Voss.
Bob enlisted in the Army Air Force in 1942, became a Commissioned 2nd Lieutenant in 1943, and made Captain in 1945. He served in the United States and ETO during WWII.
Bob graduated from Peoria High School and attended Bradley University and the University of Michigan. He worked for Kroger Company, Caterpillar Tractor Co., and then became the Sales Supervisor and Marketing VP with Piggly Wiggly Food Chain. After leaving Piggly Wiggly, he was an Account Supervisor with Hosler Advertising Agency, Inc. He joined Mace Advertising in 1951, became President in 1963, and Chairman of the Board in 1970.
Bob belonged to many Masonic groups. He joined the Temple Lodge No. 46 A.F and A.M. of Peoria in 1949, Valley of Peoria Scottish Rite in 1950 where he was Commander in Chief of the Consistory, he received his 33rd Degree and the Meritorious Service Award and Past Thrice Potent Master of the Lodge of Perfection; Mohammed Shrine Temple in 1950 and became Potentate in 1971; Peoria Chapter No. 7 of Royal Arch Masons, Peoria Council No. 11 Royal and Select Masons, Peoria Commandery No.3 of Knights Templar of the Peoria York Rite; St. Helena Conclave Red Cross of Constantine; Royal Order of Jesters Court 40 of Peoria in 1958 where he was Director in 1975 and Royal Director of the National Royal Order of Jesters in 1987.
He also belonged to the Peoria Advertising and Selling Club, University Club, Creve Coeur Club, Cosmopolitan Club, Elks Club, and Mt. Hawley Country Club, where he was an honorary life member and served as President. While living at Bickford House, he served as the President of the Resident Council. Bob also enjoyed volunteering at American Red Cross, United Way, and Proctor Hospital.
He loved spending time on the golf course with his many friends, and had the opportunity to travel the world with his wife through many Shrine and Jester functions. Bob was a wonderful husband, father, and grandfather, and will be greatly missed.
Bob's family would like to sincerely thank the staff at Bickford House for the wonderful care they provided, as well at Vitas Hospice and Dr. Brian Cohen.
Bob attended First Baptist Church of Peoria. A memorial service will be held at Cumerford-Hurd Funeral Home located at 428 West McClure Avenue on Saturday, May 10, 2014, at 11:00am. Visitation will take place one hour prior to the service. Bill Cordes will officiate. Cremation rites have been accorded.
Memorials in honor of Bob may be made to Shriners Hospitals for Children.
Bob's online memorial website may be viewed at www.hurdfamilyfunerals.com.


To send flowers to the family or plant a tree in memory of Robert "Bob" F. Voss, please visit our floral store.

To send flowers to the family in memory of Robert Voss, please visit our flower store.