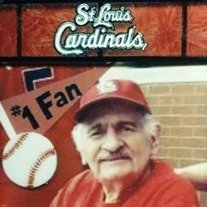 Robert was preceded in death by his wife Dovie, and two sons, Richard and Patrick.

Robert was an inspector at Caterpillar for many years, retiring in 1983. He was an excellent checkers player, in which he rarely was beat. He was also a die hard St. Louis Cardinals fan. He enjoyed spending time with all of his grandchildren, whom he loved very dearly.

Cumerford-Hurd Funeral Home in Peoria has been entrusted with arrangements. Cremation Rites have been accorded. A memorial service is scheduled for Saturday June 8, at 3:00 PM at Bethany Missionary Church in East Peoria. Online condolences may be left for the family at www.hurdfamilyfunerals.com


To send flowers to the family or plant a tree in memory of Robert F. Roberts, please visit our floral store.

To send flowers to the family in memory of Robert Roberts, please visit our flower store.