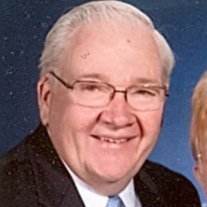 Robert Fredrick Lindberg, age 72, of Peoria, passed away on the Sunday, May 5, 2013 at his residence in Peoria.

Robert was born on January 2, 1941 in Warren, Pennsylvania to Carl L. and Leah (Henderson) Lindberg. He married Lila K. (Parkhill) Kellogg on November 21, 1992 at First English Lutheran Church in Peoria. He was previously married to Barbara Lindberg.

Robert received his BA Degree from Marietta College in 1962, his MA Degree from Ohio University in 1964 and his Ph.D. from Michigan State University in 1971 with a degree Audiology, Speech Pathology and Speech Science as well we Rehabilitation Counseling. He worked for the Department of Audiology, Eye and Ear Hospital of Audiology at Bradley University from 1971-1977. Robert then worked for Methodist Hospital as an Audiologist before opening his own practice, the Central Illinois Hearing Centers, serving in Peoria, Bloomington, Macomb and Canton. Robert was a member of the American Speech and Hearing Association, the Illinois Speech and Hearing Association as well as the Task Force, By-Law and Budget Committees, the Peoria Area Speech and Hearing Association serving as President, Vice President and Chairman of the Professional Standard Committee. Robert had several published papers, grants and publications.

Robert was a member of First English Lutheran Church in Peoria. He was a 33 Degree Mason with the Masonic Lodge, and was a member of the York Rite Bodies and the Scottish Rite. He was very active in the Boy Scouts of America. Robert enjoyed golfing, bowling, reading but most of all he loved spending time with his family. Robert was also very sociable and he never met a stranger.

Cremation rites will be accorded and a memorial service will held on Thursday, May 16th at 10am at First English Lutheran Church in Peoria. Rev. Dr. James Lillie will be officiating. Visitation will be held one hour prior to the services at the church. In lieu of flowers, memorials may be made to the Scottish Rite. Online condolences may be made through www.hurdfamilyfunerals.com


To send flowers to the family or plant a tree in memory of Robert F. Lindberg, please visit our floral store.

To send flowers to the family in memory of Robert Lindberg, please visit our flower store.