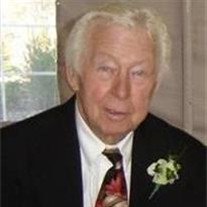 Robert graduated from Manual Training High School in 1940 and enlisted in the United States Air Force in 1942. He served as a Bomber Pilot in WWII, and was honorably discharged in 1944. He formed Ball and Bledsoe Builders, Inc. with his brother-in-law, Wayne E. Ball, and operated until his retirement in 1985.

He was preceded in death by his parents; brother, Thomas; sisters Betty Burk and Margie Ball; and son-in-law, Earl Pogue.

Robert was a past president of the Peoria Evening Optimist Club, a member of the Carpenters Union Local 183, sang in the choir at Arcadia Avenue Presbyterian, and was a passenger on the first Honor Flight from Peoria. He enjoyed golfing, gardening, good jokes, and watching the Chicago Cubs. Robert's family was his most valuable treasure; He always enjoyed having his loved ones near.

A memorial service will be held at First Federated Church in Peoria on Thursday, February 26, 2015 at 11:00am. Visitation will be held one hour prior to the service time at the church. Cremation rites have been accorded and burial of Robert's ashes will be held at a later date at Arlington National Cemetery. Cumerford-Hurd Funeral Home is in charge of arrangements.

Memorials in honor of Robert may be made to Peoria Honor Flight or Disabled American Veterans.

Robert's online memorial website may be viewed at www.cumerford.com


To send flowers to the family or plant a tree in memory of Robert S. Bledsoe, please visit our floral store.

To send flowers to the family in memory of Robert Bledsoe, please visit our flower store.