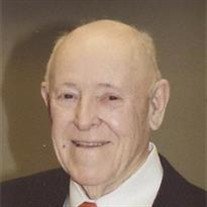 He is preceded in death by his parents; one sister, Ethel Rhodes; and two brothers, Chester Stage and Thomas Stage.

Richard graduated from Woodruff High School in Peoria and went on to serve in the United States Army from 1951-1954 as a Private First Class, defending his Country in the Korean War.

He worked at Caterpillar in Peoria as a Welding Inspector retiring in October 1994.

Richard dedicated most of his time to the organizations he was involved in. He was a member of the Alta Lodge 748 AF and AM of Peoria where he served as Worshipful Master in 1986, became a member of the Scottish Rite Cathedral Valley of Peoria 1979, where he served as Most Wise Master of the Chapter of the Rose Croix in 1995 and attended the Men's Luncheon Club, was President of Mohammed Temple Shrine in 1979 where he participated in many of their clubs and units: the Legion of Honor, Greater Peoria Shrine Club, Traffic and Transportation Club, Hillbilly Clan #44, and Antique Car Club, where he held the record for the most consistent antique car driver in the Santa Claus Parade. He belonged to the German American Society, Harmonie-Damenchor Choir of the German American Society, Peoria Casting Club, Chillicothe Sportsman Club, and a member of the Eagles Military Drill Team. He loved spending time with his family, fishing in Minnesota, hunting, playing golf, and bowling.

Richard's family would like to give a special thanks to OSF Hospice for their care, and to his dear friend Don Lingle, for always being there.

Visitation will be held from 9:00am-11:00am on Thursday, September 11, 2014 at Cumerford-Hurd Funeral Home, located at 428 West McClure Avenue in Peoria with Masonic services and a funeral service immediately following. Reverend Ray Harrison will officiate. Cremation rites will be accorded and burial will be at a later date.

Memorial donations in honor of Richard may be made to Shriners Hospital for Children.


To send flowers to the family or plant a tree in memory of Richard Lyle (Dick) Stage, please visit our floral store.

Please click here to view the video tribute
To send flowers to the family in memory of Richard Stage, please visit our flower store.