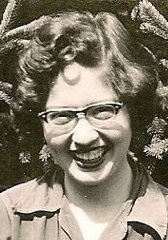 Rhea M. Jones, 75, of Mapleton, passed away at 8:00 p.m. on Sunday, August 18, 2013, at Pekin Hospital.
Funeral Services will be at 1:00 p.m. on Thursday, August 22, 2013, at Clary Funeral Home, 3004 West Lake Avenue in Peoria, with Fr. Brian Kellington and Deacon Laurie Kellington officiating. Visitation will be from 11 a.m. to 1:00 p.m., prior to services at the funeral home. Entombment will be in the Chapel of Peace Mausoleum at Parkview Cemetery in Peoria.
Rhea was born in Mount Clemens, MI on August 6, 1938, a daughter of Frank and Rhea (Nie) Tate. She married John Jones in Peoria in 1958. He preceded her in death in December of 1998. She was also preceded in death by her parents.
She is survived by her children, Gregg (Lynn) Jones of Paducah, KY, Kimberly Dross of San Antonio, TX and Danny and Kathy Jones of Peoria; grandson, Branden (Angela) Dross and granddaughters, Samantha Dross and Emily Van Auken; great grandchildren, Branden Jr., Jackson and Annabelle; and several brothers and sisters.
Rhea earned her Bachelor of Science in Nursing from Bradley University and her Masters from Western Illinois University. She retired as a Registered Nurse with Proctor Hospital, after twenty years of service. She also retired as a special education teacher with Jameson School and taught nursing at Methodist Medical Center. She was last employed as a Registered Nurse with Washington Christian Village.
She was a member of St. Paul Episcopal Church in Pekin, for over forty years, a member of The Order of the Daughters of the King and volunteered with the Special Olympics.
Memorial contributions may be made in Rhea’s memory to Special Olympics Illinois, 605 East Willow Street, Normal, IL 61761.


To send flowers to the family or plant a tree in memory of Rhea Jones, please visit our floral store.