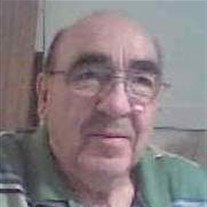 He was born on December 19, 1931 to Raymond Weitzel and Mary E. (Huckaby) Weitzel in Springfield. He married Jeanette Kolowski in1951, she passed on December 18, 1970. He later married Leticia Rebholz in 1972. She preceded him in death on March 18, 2009. He last resided with his beloved Fay McGowan.

Raymond was a truck driver for many years, and a Teamster Union Member. He enjoyed camping, drinking beer, fishing and hunting. He was involved in the Knights of Columbus, Silver Sneakers Group, and Tuesday morning senior citizens group.

Raymond's online memorial may be viewed at www.hurdfamilyfunerals.com

To send flowers to the family or plant a tree in memory of Raymond T Weitzel, please visit our floral store.

To send flowers to the family in memory of Raymond Weitzel, please visit our flower store.