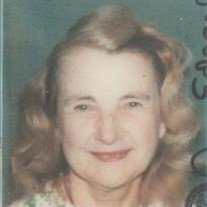 Nancy Josephine (Werckle) McNear, 91, of Peoria, IL died on April 2, 2014.
She was born August 13, 1922 in Peoria, IL to Frank W. Werckle and Winifred J. (Johnson) Werckle. She married Clinton McNear in 1946 in Peoria. He preceded her in death on December 20, 1954.
Nancy is survived by her daughter, Virginia M. McNear of Peoria Heights, as well as her sister, Winifred (William) Ebert of Washington.
She was preceded in death by her husband, parents, and her daughter, Nancy J. McNear.
Nancy attended Bradley University, taking English and Literature classes.
Nancy was employed at the United States Government Agricultural Research Lab and was later a homemaker. She was also a former member of the Country Club of Peoria.
Funeral service will be held at Cumerford-Hurd Funeral Home, located at 428 West McClure Avenue in Peoria at 2:00pm on Monday, April 7, 2014 with a visitation one hour prior. Burial will be in Springdale Cemetery. Doctor Robert Bardeen of Westminster Presbyterian Church will officiate. Cumerford-Hurd Funeral Home is in charge of arrangements.

Memorials may be made to the donor's choice. Nancy's online memorial website may be viewed at www.hurdfamilyfunerals.com


To send flowers to the family or plant a tree in memory of Nancy Josephine McNear, please visit our floral store.

To send flowers to the family in memory of Nancy McNear, please visit our flower store.