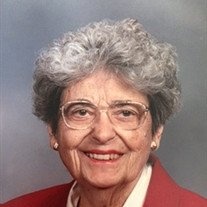 Mary was preceded in death by her parents, her brother Steven Daglas, her husband Andrew, and one son, Andrew Jr.

Mary attended Peoria High School and then graduated from Bradley University where she majored in French and was a member of Sigma Kappa Sorority. She then taught school before her marriage.

During World War II, Mary worked at Caterpillar while her husband served in the US Army overseas. When he returned from Europe, she devoted herself to making a home and rearing her children. She later returned to teaching and taught 5th grade at Garfield School in Peoria for many years.

Mary and Andy responded to the lure of the open road and took their children, and later their grandchildren, on many camping trips in their travel trailer, going to almost all the national parks and most states. They also joined in 5 extended trips in their trailer with the Good Sam Caravans in Mexico. After their children were grown, Mary and Andy visited many foreign lands including most countries in Europe, Russia, China, India, Egypt, and Australia. Their last trip was a trip around the world.

After her husband's death, Mary made her home with her son John. She continued to travel with her children, including a yearly visit to Santa Fe, New Mexico for a week of opera.

Mary was a longtime member of the Universalist Unitarian Church of Peoria, the Peoria Women's Club, and the Retired Teachers' Association. She was a prolific reader and enjoyed gardening and quilting, sewing many quilts for others over the years. She was a loving mother and would do anything for her children and grandchildren. She was kind and tolerant and she admired the philosophical mind and viewpoint when she found it in other people.

Mary had a happy and healthy long life until the last 3 months. Her family wishes to express gratitude for the kind care of OSF Hospice.

Cremation rites have been accorded and a family graveside will be held in Springdale Cemetery. Cumerford-Hurd Funeral Home is in charge of arrangements. A memorial service will be held at 11:00 AM on Saturday, September 26, 2015 at the Universalist Unitarian Church, 3000 W. Richwoods Blvd, Peoria, IL, 61604.

Memorials may be given to the Universalist Unitarian Church or to Bradley University. Mary's online memorial website may be found at www.cumerford.com, where condolences and memories may be shared.


To send flowers to the family or plant a tree in memory of Mary Emily Harris, please visit our floral store.

To send flowers to the family in memory of Mary Harris, please visit our flower store.