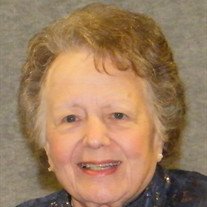 Margaret Anne Serup, 85, of Princeville passed away at Heddington Oaks on July 6, 2015.

She was preceded in death by her parents.

Margaret graduated from Woodruff High School and went on to receive a degree in Music Education from Bradley University. She taught primary school for 40 years, working for District 150 and ending her teaching career at Northmoor Elementary. She was a sister in the Sigma Kappa Sorority at Bradley University. Margaret had a beautiful soprano singing voice and dreamt of singing opera. Instead, she shared her passion with the children she taught, both in school and during private lessons. She directed various choirs at several churches over the years, was a Girl Scout leader, enjoyed sewing and quilting, and loved spending time with her family. Family RV trips created some of Margaret's fondest memories.

A funeral service for Margaret will be held at Cumerford-Hurd Funeral Home, 428 W. McClure Ave. in Peoria on Friday, July 10, 2015 at 11:00am. Pastors from United Presbyterian Church will officiate. Visitation will be held at the funeral home two hours prior to the service. Burial will take place in Springdale Cemetery.

Memorials in honor of Margaret may be made to her family and will be placed into the Margaret Galbreath Serup Memorial Music Scholarship.

Margaret's online memorial website may be viewed at www.cumerford.com

To send flowers to the family or plant a tree in memory of Margaret Anne Serup, please visit our floral store.

To send flowers to the family in memory of Margaret Serup, please visit our flower store.