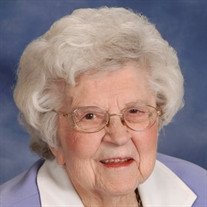 Margaret M. Peters Sayre, 95, of Peoria died at 2:30 p.m. Tuesday, May 13, 2014 in Peoria, IL at Hillside Lutheran Nursing Home.
She was born in Aledo, IL, on March 31, 1919, daughter of Wilmer J. and Mary Bradford Peter, grew up in Westmont IL., graduated from Downers Grove High School, and received her Bachelor of Music in piano and organ from Illinois Wesleyan University in 1941.
She married Robert Lee Sayre in 1941. Following his service in World War II, the couple moved to Peoria in 1946. Robert preceded her in death in 2009.
Margaret is survived by two daughters and one son, Kathryn (Gale) Bridgewater of Peoria, Patricia (Cooper) Graham of Baltimore, MD, and Michael Lee Sayre of Fairlawn, OH; Grandchildren: Margaret Graham, Geoffrey Graham, David Sayre, Ahdom Sayre, Bohdon Sayre, Gale Bridgewater II, Barbara Bridgewater, Michael Paul Bridgewater, Stephen Bridgewater; 12 great grandchildren and 6 great-great grandchildren.
At Illinois Wesleyan she held a teaching fellowship in organ and served as church musician at a Christian church and at a Jewish synagogue. In Peoria Margaret served at First Methodist Church as organist and part-time coordinator of music for 25 years. She was certified by the National Methodist Church and consecrated as a Diaconal Minister in the Methodist Church. She served as organist at University Avenue Methodist Church for 18 years and retired in 1999. In 1956 she was the charter member if the National Fellowship of Methodist Musicians and was Jurisdictional representative on the National Board for four years. She attended at least 23 national and jurisdictional convocations since the inception of the fellowship.
She was a member of the American Guild of Organists and served as Dean of the Peoria Chapter for several years.
Margaret was on the organ faculty at Bradley University and also maintained a private studio of individual and class piano students which began in 1947 and continued until her retirement in 1999. She was a certified teacher in the Music Teachers National Association, Illinois State Music Teachers Association and the Peoria Area Chapter.
She was a member of Monday Morning Music Club, a professional performing music group, and an officer of the Amateur Musical Club.
Among church organizations, she belonged to the United Methodist Women, Triple M Adult Couples Group, as well as Current Events Club.
Services will be held at 11:00 a.m. on Monday, May 19, 2014, at the First United Methodist Church of Peoria. Visitation will be at Cumerford-Hurd Funeral Home, 428 W. McClure Ave., Peoria, on Sunday from 3:00 - 6:00 p.m. and at the church at 10:00 a.m. on Monday. Burial will be at Swan Lake Cemetery.
Memorials may be made to her son's ministry at Faith Education Institute at 2747 Crawfis Blvd., Ste.208, Fairlawn, OH 44333, and First United Methodist Church of Peoria, IL.
Margaret's online obituary may be viewed at www.cumerford.com


To send flowers to the family or plant a tree in memory of Margaret M. Sayre, please visit our floral store.

To send flowers to the family in memory of Margaret Sayre, please visit our flower store.