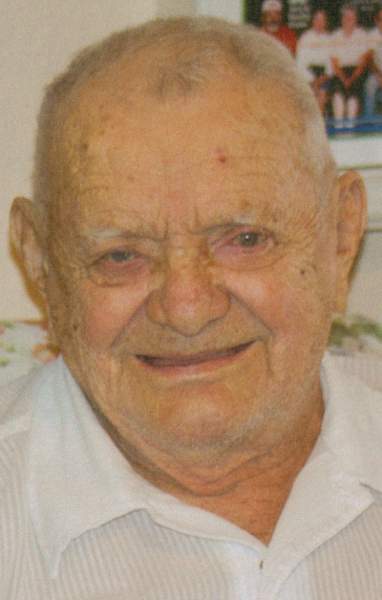 Louis G. “Louie” Brod, 88, of Chandler, AZ, formerly of East Peoria, passed away at 8:19 a.m. on Friday, November 29, 2013, at home.
Funeral services will be at 10:30 a.m. on Thursday, December 5, 2013, at Glad Tidings Assembly of God in East Peoria, with Pastor Fred Doughty officiating. Visitation will be one hour prior to services at the church. Interment will be at Camp Butler National Cemetery in Springfield, with Military Honors provided by the Sangamon County Interveterans Burial Detail.
Louie was born on November 11, 1925 in Bartonville, a son of John and Barbara (Gerber) Brod. His parents preceded him in death, along with a stepdaughter, Bobbie Danzer, and two brothers, John and George Brod. He married Mary Ellen (Weitzel) Binegar on September 28, 1985 at Faith Christian Centre in Washington. She survives.
He is also survived by his daughter, Summer Starr; stepdaughters, Gina (Jeff) Hillis of Phoenix, AZ, Nina (Randy) Engelking of Chatham and Bridgid (Mark) Ray of Peoria; stepson, Ted Binegar of Bryant; ten grandchildren, Brad Hammen, Rachel Sutkowski, Becky Danzer, Jill Horat, Tonya Urich, Stacy Boyd, Paige Burris, Hannah Engelking and Tyler and Toby Binegar; and fifteen great grandchildren. He was truly a “Great Grampa”.
Louie was the developer and owner of Tuck Away Mobile Manor in Germantown Hills from 1956 through 1979. He was a member of the East Peoria Community Church of God, Glad Tidings Assembly of God in East Peoria and, most recently, Maricopa Assembly of God. Louie loved the Lord and serving Him. He served on ten mission trips on five continents, as well as his surrounding communities.
He was a U.S. Army World War II Veteran with the 89 th Infantry Division, the Rolling W, serving under General Patton. They engaged in battles on foot from France to Czechoslovakia. His division freed the first concentration camp, Ohrdruf.
Memorial contributions may be made in Louie’s memory to Teen Challenge in Peoria.
Funeral arrangements have been entrusted to Clary Funeral Home, 3004 West Lake Avenue, in Peoria.


To send flowers to the family or plant a tree in memory of Louis Brod, please visit our floral store.