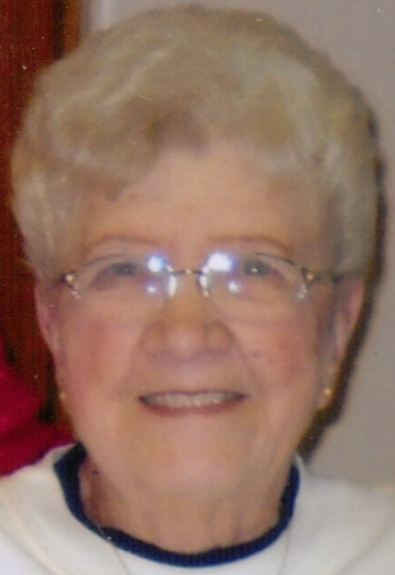 Lois May Reeves, 86, of West Peoria, passed away at 9:35 a.m. on Thursday, April 5, 2012, at her home.
Funeral services will be at 10 a.m. on Tuesday, April 10, 2012, at Clary Funeral Home, 3004 West Lake Avenue, in Peoria, with OSF Hospice Chaplain Steve Drennan officiating. Visitation will be from 5 to 7 p.m. on Monday, April 9, 2012, also at the funeral home. Interment will be at St. Mary Cemetery in West Peoria.
Lois was born in Peoria on November 4, 1925, the daughter of Harry H. and Miron May (Ferguson) Smith. She married Walter A. “Junior” Reeves, Jr. at St. Patrick Catholic Church in Peoria. He preceded her in death on April 15, 1978 in Peoria.
She is survived by her children, Gerald W. (Frances H.) Reeves of Peoria, Kathy May (Randy S.) Wright of Henderson, NV and Douglas M. Reeves of West Peoria; grandchildren, Julie A. Kincaid of Boulder City, NV, Brady J. Wright of Las Vegas, Derek M. Reeves and Dawn M. (Stephen A.) Bowman of Peoria; and nine great grandchildren.
She was a graduate of Manual High School and a parishioner of St. Mark Catholic Church.
Lois was a secretary at OSF St. Francis Medical Center for twenty-three years, retiring in 1990. She was formerly employed as a secretary at Armour Star Credit Union for over ten years.
She was formerly the co-owner, along with her husband and parents, of the Donald Duck Tavern in Peoria.
Lois enjoyed word games, crossword puzzles, reading, playing cards and yahtzee, listening to Andy Williams and ballads of the 50’s, watching St. Louis Cardinal’s baseball and going out for dinner, especially for lobster.
She adored her children and grandchildren and loved going to Las Vegas to visit her daughter and grandchildren. She will be remembered as a hard working woman, which always stepped up to help support her family, and a very loving and supportive mother and wife.
Memorial contributions may be made in Lois’ memory to OSF Hospice.


To send flowers to the family or plant a tree in memory of Lois May Reeves, please visit our floral store.

To send flowers to the family in memory of Lois Reeves, please visit our flower store.