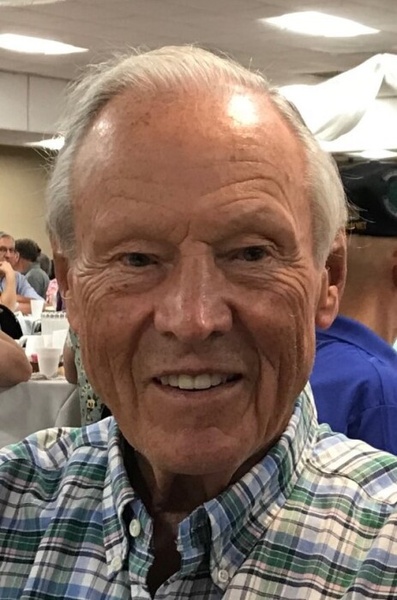 A visitation and funeral service will be held at Northwoods Community Church in the chapel on Wednesday, January 6, 2021.  Visitation will be from 3-5 pm with a memorial service following at 5 pm. Pastor Calvin Rychener will be officiating.  Social distance protocols and wearing of masks will be practiced.

Lee graduated with honors from Bradley University in 1954.  During that time, he played forward on the Bradley basketball team which placed second in the 1954 NCAA tournament.  He, along with his teammates, were later inducted into the Bradley University Hall of Fame.  He graduated with a degree in construction management and married his sweetheart Bette in 1955.  He then served his country during the Korean War as  a second lieutenant pilot in the Air Force.

Post Air Force days brought Lee and family back to Peoria where he worked for C. Iber and Sons, was President of GEMCO a division of Fleming Potter (now Fleming Packaging), until he bought 4 tennis courts from Don Ashley in 1972. This began the birth of what is now River City Athletic Club.

Lee was a true entrepreneur, always seeking ways to meet the everchanging needs within the fitness industry.  He spearheaded building acquisitions and constant renovations to meet and capitalize upon the latest fitness trends. He was happiest with a hammer in his hand and making change happen.  The Racquet Club brought the Grand Master’s Professional Tennis tournament and Hot Shots Future Stars tournaments to Peoria, giving folks the opportunity to watch professional level tennis.   The club is still managed by his son, Dan, daughter in law, Shelley, and granddaughter, Erin.

When he wasn’t working hard; he was playing hard.  He loved sailing the Illinois River as well as the Caribbean.  He was a tennis player, downhill skier, and a golf fanatic.  He enjoyed traveling throughout the country with Bette and his kids, exploring Europe, and sailing vacations with friends.  Many fun times were enjoyed when family visited at their house in Savannah, Georgia.  The last several years found him sharing time and homes with his second wife, Linda, in Peoria and Scottsdale, AZ.

Lee loved his home church Northwoods Community Church, his Savannah church, Savannah Compassion, and his Scottsdale Church.  He loved sharing meals and laughter with a great group of close friends.  We are so thankful for those friendships.

Memorial Contributions may be made to Northwoods Community Church and Bradley University.

A Celebration of Life will be held at a later time.

Funeral arrangements have been entrusted to Cumerford-Clary Funeral Home.

To send flowers to the family or plant a tree in memory of Lee O'Connell, please visit our floral store.

To send flowers to the family in memory of Lee O'Connell, please visit our flower store.