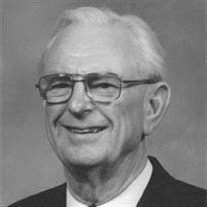 Judson S. Lindsey, age 92, died Friday, December 12, 2014, at Lutheran Hillside Village in Peoria, IL, where he had resided since 2003. Born on July 23, 1922 in Hobson, MT, Mr. Lindsey moved to Peoria from Moline with his family in 1937. He graduated from Peoria High School in 1941. Following service as an Aviation Cadet in the U.S. Army, he graduated from the Caterpillar Apprenticeship Program as a machinist. He worked as an industrial manufacturing salesman for Couch and Heyle for 36 years, followed by 8 years with Kennametal as manufacturing systems engineer.
Mr. Lindsey, married to Nancy Ann Day in 1945, is survived by her and their three children, Michael D. (Ruth) of Chicago, Thomas J. of Cincinnati, OH, and Ann Viger of Crystal Lake. Also surviving are nine grandchildren, six great grandchildren who fondly remember him as "Papa White Hair" and numerous nieces and nephews. He was preceded in death by his parents, William J. and Emma (Callaway) Lindsey, two sisters, Jane Seynei and Georgia Jackson, and his daughter-in-law Barbara (Baechle) Lindsey.
Mr. Lindsey, a member of Westminster Presbyterian Church since 1944, served as an Elder, a Deacon and on many committees. He was Past President of the Peoria Cosmopolitan Club and a life member of the Society of Manufacturing Engineers. He was an Eagle Scout and served as a Boy Scout Leader for 29 years. He was also active in the Peoria Jaycees, Little League and Pony League.
Mr. Lindsey will be remembered as a man who was always ready to help and could fix anything. He had an extensive workshop in his home where he spent many enjoyable hours on various projects. He helped establish the woodworking shop at Lutheran Hillside Village where various items such as stools and wagons were made for charity.
Mr. Lindsey enjoyed competitive sports as a participant and observer. He was a life-long Cubs fan. He attended Bradley basketball games. He followed Illini football and basketball. He cheered for his children, his grandchildren and their teams. His pastimes included fishing, bowling with friends and playing cards with skilled players who would also be gracious losers. He had a delightful sense of humor. His children remember his uncanny ability to lip read, a skill acquired to cope with congenital hearing loss. His grandchildren particularly remember how he could wiggle his ears, a trick that always brought a smile.
Visitation will be held at the Waters of Life Chapel at Lutheran Hillside Village, 6901 N. Galena Rd., Peoria on Friday, Dec. 19, 2014 at 9:30am, followed by a memorial service at 11:00am. Pr. Paul Park and Rev. Anna Saxon will preside. Cumerford-Hurd Funeral Home is in charge of arrangements. In lieu of flowers, memorial donations may be made to Lutheran Hillside Village and Westminster Presbyterian Church.
Mr. Lindsey's online memorial website may be viewed at www.hurdfamilyfunerals.com


To send flowers to the family or plant a tree in memory of Judson Sayers Lindsey, please visit our floral store.

To send flowers to the family in memory of Judson Lindsey, please visit our flower store.