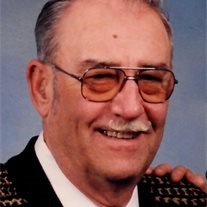 John F. Watkins, 91, of Chillicothe passed away on Saturday, February 23, 2019 at St. Francis Medical Center, Peoria. John was born on April 14, 1927 in Pekin the son of William and Theresa (McGrath) Watkins.   He married Bernadine M. Hughes on September 6, 1952 in Wyoming. Surviving are his children, Nancy (Rex) Pence of Kansas City, KS, John (Catherine) Watkins of Chillicothe, Bernard (Kathleen) Watkins of Germantown Hills, Phillip (Denise) Watkins of Chillicothe, and Kathleen (Charles) Jordan of Rome; 15 grandchildren; and 28 great grandchildren.  He was preceded in death by parents, wife, three brothers and one sister. John served during WWII in the Navy from 1945 to 1946 as a fireman aboard the submarine tender, USS Nereus and submarine rescue ship, USS Florikan.   John worked as Game Warden for Knox County area, Police Officer for Galesburg Police Department, served as Chief of Police for the City of Chillicothe, Service Technician for Sears Roebuck Co., and owned Watkins Heating and Air Conditioning.  John was a member of the Chillicothe VFW Post 4999; past member of Chillicothe Rotary; past IVC School Board Member; and past St. Edward Dart Board Team.   A funeral Mass will be held on Saturday, March 2, 2019 at 11am at St. Dominic's Catholic Church in Wyoming.  Visitation will be held on Friday, March 1, 2019 from 5pm to 7pm at Weber-Hurd Funeral Home in Chillicothe.  Burial will be at St. Dominic's Cemetery in Wyoming.  Memorials may be made to the VFW Post 4999.

To send flowers to the family or plant a tree in memory of John "Bruce" Watkins, please visit our floral store.

To send flowers to the family in memory of John Watkins, please visit our flower store.