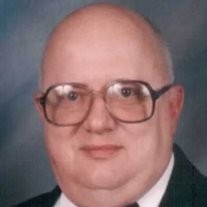 John William Sutherland, 77, of Peoria, died Thursday, February 20, 2014, at 3:32 pm at his home surrounded by family.
A memorial service will be held on Tuesday, February 25, 2014, at 10:00 AM at First English Lutheran Church in Peoria. Visitation will be held one hour prior to the service time at the church. Rev. Dr. James Lillie will officiate. A Masonic Ceremony will be held in the auditorium following the church service. Burial will take place at Lutheran Cemetery, Peoria.
John was born February 03, 1937, in Pontiac, IL, the son of A.M. (Cal) and Marcella (Denning) Sutherland. He married Georgia L. Wells in Peoria, IL, on December 1, 1962.
John graduated from Peoria High School in 1956 and attended Bradley University. He was an Industrial Engineer working for several companies in the Peoria area including R.G. LeTourneau, WABCO and McCormick Contracting for more than 32 years.
He was elected to be a member of the Illinois Masonic Lodge No. 263 on February 27, 1979. He was initiated an Entered Apprentice on March 06, 1979 and passed to the degree of Fellowcraft on April 03, 1979. John was raised to the Sublime degree of Master Mason on April 17, 1979. John was elected Worshipful Master of Illinois Lodge No. 263 for the year of 1989. John was elected Secretary of Illinois Lodge No. 263 on November 18, 1995 and served as the Lodge Secretary until April 22, 2011. John was appointed the District Deputy Grand Master for the First Eastern Area of the State of Illinois on October 05, 1996 and served as the DDGM until October 04, 2002. John was then appointed the Assistant Area Deputy Grand Master for the Eastern Area of the State of Illinois on October 10, 2003 and was the AADGM until October 09, 2009. Right Worshipful Brother John then came back to Illinois Lodge No. 263 and worked his way to Worshipful Master, again, and was elected on September 14, 2003 and was serving as the Master until his death. John was a member of Illinois Lodge for almost 35 years.
John became a member of the Scottish Rite, Valley of Peoria in 1979. He was elected the Thrice Potent Master of the Central City Lodge of Perfection in 1996. John received the Peoria Cross award in 2001. He received the Meritorious Service Award in 2005. He then received the 33 Degree in 2006. John was involved in numerous degrees and was an officer in many clubs of the Scottish Rite. John was also instrumental in the development of the Children's Dyslexia Learning Center.
Outside of the lodge, John had a passion for travel, cars and trains. He was a lifelong member of First English Lutheran Church.
Surviving is his wife of 51 years, his daughter, Leah (Greg) Grebner and their sons, Matthew and Aaron and his sister Judie (Ron) Arnold of East Peoria. He was preceded in death by his parents.
John, the man in his neighbor known as the "man on the bicycle", will be missed by his family and friends.
Memorial may be made to his church, the Scottish Rite Valley of Peoria Foundation or the charity of your choice. John's memorial website may be viewed at www.cumerford.com.


To send flowers to the family or plant a tree in memory of John W. Sutherland, please visit our floral store.

To send flowers to the family in memory of John Sutherland, please visit our flower store.