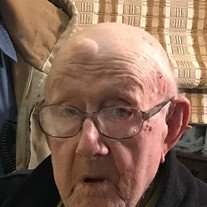 John W. "Bill" Ratliff, age 89, of Sparland, passed away on Friday, February 22, 2019 at UnityPoint Health Methodist in Peoria. John was born on December 20, 1929 in Hallock Twp. to John V. and Mary M. (Bauer) Ratliff.  He married Lena Faye Barge on February 22, 1949.    Surviving are his wife, Faye; his children, John R. "Bob" (Renee) Ratliff of Chillicothe, C. Diane (Gary) Grebner of Metamora and David (Ellen Tabor) Ratliff of Chillicothe; his grandchildren, Wendy Hart, Jeff Ratliff, Kristina (Stephen) Rauh, Derek Grebner, Ashlie (Sean Art) Ratliff and Amanda (Josh) Biggar; six great grandchildren; and his sister, Marilyn Longman of Henry.  He was preceded in death by his parents and one brother, Glen. John was a life-long farmer in the Sparland area.   He was the LaPrairie Township Road Commissioner for 50 years, a Marshall-Putnam Fair Board Director for 17 years and a 4-H Leader for many years.   John was also a member of the Marshall-Putnam Township Officials, the Marshall-Putnam Farm Bureau, the IL Valley 2-Cylinder Club, the IL State Corn Huskers, the IL Angus Association, the Marshall-Putnam Antiques Association, and the IL Sheriff Association. Funeral service will be held on Thursday, February 28, 2019 at 10:00 am at Weber-Hurd Funeral Home in Chillicothe.  Visitation will be held from 4pm to 8pm on Wednesday evening at the funeral home.  Burial will be held in the Chillicothe City Cemetery. Memorial contributions may be made to the Wyoming-Speer Fire Dept, Lacon-Sparland Ambulance Service, or IL FFA.

To send flowers to the family or plant a tree in memory of John W. "Bill" Ratliff, please visit our floral store.

To send flowers to the family in memory of John Ratliff, please visit our flower store.