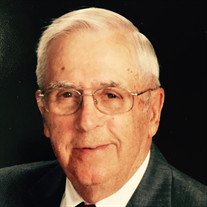 He was preceded in death by his parents, two brothers, and one sister.

John was a graduate of Huntley High School in 1939. He went on to attend Bradley University, where he earned a Bachelor's Degree in Engineering and also played baseball for three and a half years. He joined the Army Air Corp towards the end of his college career.

John began working at Caterpillar in 1955 and retired after 30 years of service in 1985 as the Utilities Manager for the East Peoria Plant. He was an avid golfer, playing 5 days a week and walking the courses until he was 90 years old. He was President of the Peoria Senior Golf League, a Charter Member for the West Peoria Fire Department, a member of the B Club and Peoria VFW, and enjoyed spending his free time golfing, bowling, and playing tennis.

A funeral service for John will be held at 11:00am on Tuesday, June 9, 2015 at University United Methodist Church in Peoria. Pastor Paul Arnold will officiate. Visitation will be held one hour prior to the service at the church. Burial will be held at Swan Lake Memory Gardens.

Memorials in honor of John may be made to University United Methodist Church or West Peoria Fire Department.

John's online memorial website may be viewed at www.cumerford.com

To send flowers to the family or plant a tree in memory of John Henry Van Ness, please visit our floral store.

To send flowers to the family in memory of John Ness, please visit our flower store.