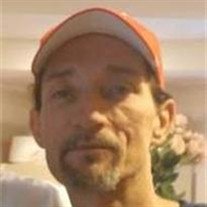 Jeffery Scott Parrott, 50, died on March 26, 2014 in Peoria.
He was born January 2, 1964 in Peoria to Glen Parrot and Sandra Defratis.
Surviving are his two daughters, Jovi Parrott and Amber Parrott, both of Pekin, and two grandchildren, Karma Morse of Tremont and Jax Faillo of Pekin. Also surviving are his two brothers, Glen (Katherine) Parrott of Farmington, and Troy Parrott of Mapleton, and four sisters, Toni Anskie of Peoria, Beverly Parrott of Hopedale, Crystal Parrott of Peoria, and Brenda Parrott of Pekin. Jeffery was preceded in death by his parents.
Jeffery worked for Bill Thienert in the construction and roofing business for 15 years.
He also enjoyed being outdoors, fishing, and camping.
Visitation and funeral service will be held at Cumerford-Hurd Funeral Home located at 428 West McClure Avenue in Peoria on Saturday, March 29, 2014. Visitation will begin at 4:00 pm and the funeral service will begin at 6:30.
There will also be a Celebration of Life Memorial held for Jeffery at 3:00 pm on Sunday, March 30, 2014, at the Eagles Club located at 1704 S. East, Peoria, IL 61605.
A Benefit for Jeff Parrott will also take place on April 12, 2014 from 4:00 to 9:00 pm at the VFW Post 4835 at 628 S. Main Street, Creve Coeur, IL 61610.
Cremation rites will be accorded following the services. Jeffery's online memorial may be viewed at www.hurdfamilyfunerals.com


To send flowers to the family or plant a tree in memory of Jeffery Parrott, please visit our floral store.

To send flowers to the family in memory of Jeffery Parrott, please visit our flower store.