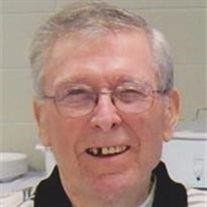 Herman J Bill, Jr., 75, of Peoria Heights, died on April 27, 2014 at Proctor Hospital in Peoria. He was born on October 27, 1938 to Herman J Bill and Ruth (Skeen) Bill in Peoria. He married Judy Rhoades in Peoria on May 31, 1980. Herman is survived by his wife, Judy, four sons, Jeff (Juli) Bill of Mapleton, Doug (Jenny) Bill of Bartonville, Thomas (Peggy) Carter of Gurnee, James (Sherryl) Carter of Peoria Heights, and two daughters, Linda (Ralph) Turner of Moline, and Karen (John) Snider of Mardela Springs, MD. He is also survived by 20 grandchildren, 6 great-grandchildren, many nieces and nephews, and one brother, Bert Bill. Herman is preceded in death by his parents, one son, Michael, and his brother Art. Herman graduated from Manual High School and was a truck driver for Speedy Delivery for 29 years. After he left his job there, he worked for Metro Moving, and then Northwoods Mall. He was a member of the American Legion Post #979, as well as Elks Lodge #20 and Teamsters Retiree. Herman loved Cardinal's baseball, bowling, and playing cards, especially solitaire. Funeral service will be held at Cumerford-Hurd Funeral Home located at 428 West McClure Avenue in Peoria on Thursday, May 1, 2014 at 3:00 pm. Visitation will be two hours prior to the service. Rick Rogy will officiate. Burial will be at Swan Lake Memory Gardens following the service. Memorials in honor of Herman may be donated to St. Jude Children's Hospital of Peoria located at 530 NE Glen Oak Ave, Peoria, IL 61603, or a charity of the donor's choice. Herman's online obituary may be viewed at www.hurdfamilyfunerals.com

To send flowers to the family or plant a tree in memory of Herald Bill, please visit our floral store.

To send flowers to the family in memory of Herald Bill, please visit our flower store.