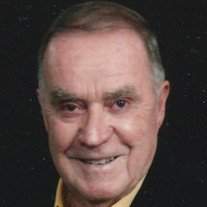 Henry "Hank" McRoberts, 91, of Peoria, passed away on Wednesday, April 15, 2020 at Cornerstone Rehabilitation and Health Center in Peoria Heights.
A Celebration of Hank's Life will be held at a later date.
Hank was born on July 23, 1928 in Rolla, MO, a son of Clarence and Lola (Marshall) McRoberts. He married Shirley Waller and she preceded him in death on October 31, 1978. He later married Carol Brandon Erickson in 1980. She preceded him in death in November of 2014 in Peoria. He was also preceded in death by all of his eight siblings.
He is survived by his children, Donna Brown of Peoria and John Erickson of East Peoria; grandchildren, Nick (Rachel) Brown and Jose, Isabel, Brandon and Xavier Erickson; and great grandchildren, Anna and Evelyn Brown.
Hank served in the United States Army during the Korean War. He owned and operated Summit Products in Peoria for many years before his retirement. He was a member of the IVY Club. He was a founder of the Walk to Emmaus, along with his first wife, Shirley. He and his second wife, Carol, were on the Walk to Emmaus Team that took the experience to Estonia. He was a pilot, and loved to fly. He considered himself a very fortunate man, to have managed to fulfill every dream he'd had in his life.
Memorial contributions may be made in Hank's memory to First United Methodist Church in Peoria, where he was a member.

To send flowers to the family or plant a tree in memory of Henry "Hank" McRoberts, please visit our floral store.

To send flowers to the family in memory of Henry McRoberts, please visit our flower store.