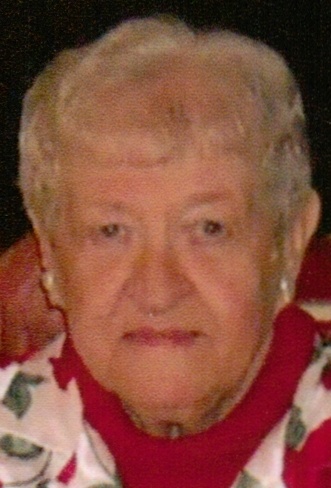 Georgia Mae “Jo” Ligtvoet, 85, of Washington, formerly of Peoria, passed away at 10:15 a.m. on Friday, December 13, 2013, at Washington Christian Village.
On October 27, 1928, a beautiful little girl was born to George and Hulda (Oleen) Button, at Methodist Hospital in Peoria. Georgia was the eighth child of ten, born to the Button family. Only Kathryn Tucker and Richard (Shirley) Button survive, both of Tucson, AZ. She is also survived by several nieces and nephews, scattered throughout the United States.
Georgia attended Loucks and Longfellow White primary schools. She went to Peoria Central High School for three years and finished her senior year at Chillicothe High School. While in high school, she was very active in the school chorus. During her senior year, she wrote the lyrics to the school loyalty song, which is still sung today.
After high school, Georgia worked in the office at Wahlfield Mill Works. In 1953, while working at Wahlfield, she met the love of her life, William “Dutch” Ligtvoet. He had just returned home from the Korean War. Both Dutch and Georgia found work at Caterpillar, Inc. He worked as a laborer on the “burn line” and she was employed as a stenographer in the engineering department. Working as a stenographer was her all-time favorite job.
On January 10, 1958, Dutch and Jo were married, before a Justice of the Peace in Peoria. Ten months later, their first child was born. Together, they raised Timothy, Terry and Julie (Denny) McCullough, all of Peoria.
Georgia had always been in love with music. In her earlier years, she was the lead singer in The Pitch Pipers, who won first place in a barber shop competition. Georgia was also a member of the Belles of Harmony.
After Dutch passed away, on April 18, 2010, Georgia moved to Leisure Acres in Washington, where she became good friends with several of the ladies in her building. Georgia’s family would like to thank Judy, Alice, Shirley, Terri, Barb and all of the other ladies who took such good care of her. Georgia liked to work on big jigsaw puzzles, play dominoes and watch old movies with “the girls”.
Georgia loved to spend time with her two granddaughters, Codie Ligtvoet, 18 of Low Point, and Kaylie McCullough, 16 of Peoria. They were the “loves of her life”.
Georgia’s family would also like to thank all of the doctors, nurses and staff at Methodist Medical Center and Methodist Hospice for the wonderful care they gave, during her recent illness.
Memorial contributions may be made in Georgia’s memory to the America Red Cross Central Illinois Chapter for Tornado Relief.
Funeral services will be private, with interment at Camp Butler National Cemetery in Springfield.
Funeral arrangements have been entrusted to Clary Funeral Home, 3004 West Lake Avenue, in Peoria.

To send flowers to the family or plant a tree in memory of Georgia Mae "Jo" Ligtvoet, please visit our floral store.

To send flowers to the family in memory of Georgia Ligtvoet, please visit our flower store.