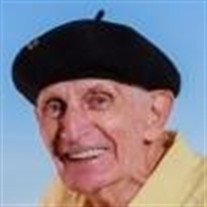 He was preceded in death by his parents, wife, one sister and four brothers.

Gene was a life-long Peorian, growing up on the east bluff. He attended St. Bernard's Grade School and Spalding Institute. Upon graduation, he enlisted in the U.S. Army where he served honorably until he was discharged after the end of WWII. He then attended the University of Illinois earning a degree in pharmacology and worked as a Pharmacist for more than 40 years.

Gene was a founding member of the Peoria Orchid Society.

He enjoyed volunteering for the American Red Cross for many years and assisted them at ground zero in New York City after 9-11.

In retirement, Gene traveled extensively overseas and loved to share his travel stories with anyone that would bend an ear. He was rarely seen without wearing his signature French beret. He spent many hours learning about the art and history of the places he visited and would bring back unique souvenirs for his children.

Gene donated his body to the Anatomical Gift Association of Illinois.

He attended St. Philomena Catholic Church in Peoria, where a memorial Mass will be held at 11:00 a.m. on Saturday, June 27, 2015. Visitation will be one hour prior to the service.

Memorials may be made to St. Philomena Catholic Church, the American Red Cross or to the donor's choice.


To send flowers to the family or plant a tree in memory of Eugene T. Schlink, please visit our floral store.

To send flowers to the family in memory of Eugene Schlink, please visit our flower store.