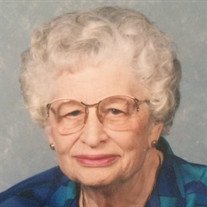 Esther was born on March 19, 1914 in Dubuque, IA to John and Edith (Youngblood) Daniels.

She was preceded in death by her parents; one sister, Ruth Fedders; and a brother-in-law, Fred.

Esther was an accountant for many years, retiring from P.J. Hoerr Construction.

She was a member of Westminster Presbyterian Church in Peoria.

Memorials may be made to Proctor Endowment Home or Westminster Presbyterian Church.

Esther's online memorial may be viewed at www.hurdfamilyfunerals.com


To send flowers to the family or plant a tree in memory of Esther M. Daniels, please visit our floral store.

To send flowers to the family in memory of Esther Daniels, please visit our flower store.