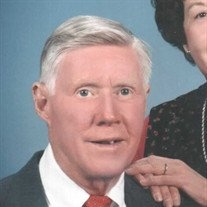 Don grew up in Eureka, Illinois, and graduated from Eureka High School where he excelled in several sports. Shortly after graduation in 1944, he joined the U.S. Army and served as a Sherman tank driver in World War II. He fought in the 3rd Armored Division under General George Patton and earned the Bronze Battle Star, Distinguished Unit Badge, and both the Victory and Army of Occupation Medals. Following the war's end, he continued to serve as part of the Occupation Force. Upon his return to the United States he attended Bradley University.

The most important part of Don's life was his Christian faith and his family. Don was a devoted husband, father, and grandfather who passed his faith on to all of his children and grandchildren. He was an active member of Mt. Calvary Lutheran Church, Peoria, for more than 65 years and served in many capacities, including as an elder of the Church.

Don worked as a general contractor and builder in the Peoria area for nearly twenty years, building more than 100 homes before becoming a small business owner in central Illinois for the next two decades. Don had many interests including golf, flying as a private pilot, small and big game hunting, and target shooting, in which he was an expert marksman.

Don wanted all of his relatives, friends, and acquaintances to know that he placed full confidence and trust in his Lord and Savior Jesus Christ, who promised: "I am the resurrection and the life; he that believes in Me shall never die."

A funeral service will be held on Monday August 11 at 10:00 a.m. at Mt. Calvary Lutheran Church with a visitation preceding beginning at 9:00 a.m. The Rev. Barry Long will officiate. Burial, with military honors, will be in the Lutheran Cemetery. Cumerford-Hurd is in charge of arrangements.

In lieu of flowers, memorials may be made to Mt. Calvary Lutheran Church. Online condolences may be sent to the family at www.cumerford.com.


To send flowers to the family or plant a tree in memory of Donald L. Hoffman, please visit our floral store.

To send flowers to the family in memory of Donald Hoffman, please visit our flower store.