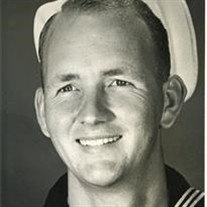 Burton L. Hasselberg, 94, died peacefully at his home on April 28, 2015 with family by his side. He was born March 31, 1921, at West Brooklyn, Lee County, Illinois, to Hjalmar and Edna Hazelman Hasselberg. He married Barbara Alice Starrett April 16, 1949 at Manito Methodist Church. She died December 4 , 2006. He later married Margaret Day Ellis who died November 9, 2012.

A 1938 graduate of Manual High School, he then worked in St. Louis building gun turrets for bombers until Pearl Harbor. Burt was very proud that he served in the U.S. Navy from 1942 to 1946 as an aviation machinist's mate at several naval air stations and on board the carrier U.S.S. Prince William in the Atlantic Theater. His father served in the Navy during WWI and Burt was proud of that tradition. Burt claimed he never lost a pilot, but his mixed mechanical skills prompted family to think he was lucky he didn't. After the war he took advantage of the GI Bill and graduated from the University of Illinois College of Agriculture in 1949. He loved the U of I where he first lived in the university skating rink which had been turned into a dorm to house some of the many students newly out of the armed services. He washed dishes at a fraternity to help with expenses. Immediately after graduation he began work as a farm manager with Greene Farm Management and retired as President after 42 years of doing a job he loved. He was past President of the Illinois Society of Farm Managers and Rural Appraisers.

Burt was very active in Boy Scout Troop 33 at Sipp School where his sons were involved and spent many nights at Camp Wokanda. He took his involvement in service and fraternal organizations seriously. He chaired the South-West Kiwanis Memorial Day service for many years and earned the Dr. Luis V. Amador Medallion.

Masonic activities were a huge part of his life and he devoted countless hours to those organizations. He sponsored many to Masonic membership. He held dual memberships at both Manito and Temple Masonic Lodges and was Worshipful Master in 1976. At the Scottish Rite, he was Most Wise Master of Rose Croix and served as Commander in Chief of Peoria Consistory. He was awarded the meritorious service award from the Council of Deliberation and was coronated a Thirty-Third Degree at Cleveland in 1983, by the Supreme Council, Sovereign Inspectors General. At Mohammed Temple Shrine, his activities included both the Dramads and Legion of Honor and Director of the Royal Order of Jesters Court No. 40.

Burt was instrumental in the establishment of Three Sisters Park and the construction of the Hasselberg Ag Museum there.

Family camping when the kids were still young was a great source of pleasure to Burt. The family spent every Sunday and many summer weeks at the family farm near Manito. He loved animals and always had a family pet from horse Tony to dog Willie to cat Cody. He was blessed with joy of life and an unwavering optimism and positive attitude that served him right up to the end, always cheerful and happy to see anyone. He traveled the world but held travel to home country Sweden most dearly. Burt and Barb and then Peggy visited their Swedish friends Marta and Soren Nygren until health issues interfered.

He was an active resident of Lutheran Hillside Village since January, 2003 and chaired the Recycle Committee, with volume of 24 tons annually. He directed the chorus for variety shows and never missed Friday Happy Hour.

He was an active member of the First United Methodist Church for 66 years and in later years attended the Lutheran services at LHV. The family wishes to thank the kind, hardworking and dedicated caregivers in the assisted living and health care units at LHV and also the OSF Hospice nurses who helped in so many ways. Cremation rites have been accorded. Visitation will be held at Lutheran Hillside Village from 9:30 to 11:00 this Friday May 1 with services immediately thereafter. Memorials may be made to the Lutheran Hillside Village Foundation.

Cumerford-Hurd Funeral Home is in charge of arrangements.

Burt's online memorial website may be viewed at www.cumerford.com


To send flowers to the family or plant a tree in memory of Burton L. Hasselberg, please visit our floral store.

To send flowers to the family in memory of Burton Hasselberg, please visit our flower store.