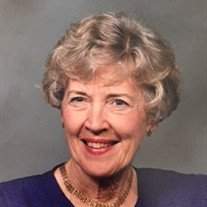 She was born in Cullom, IL, a rural village in Eastern Illinois, on November 26, 1926. She was the daughter of Robert and Francis (Helm) Van Alstyne. She was a happy child and was noted for her love of singing. She grew up in the loving home of her Aunt Edna and Uncle Louis Van Alstyne. Her uncle was the editor of the local newspaper, The Cullom Chronicle, and her aunt was an English teacher. She learned early in life the use of proper English and the love of reading. She was the go-to person in our family when we were unsure of spelling and pronunciation of words. Her home was across the street from the Cullom Methodist Church and she always had a strong faith in it's teaching..

After graduation from Cullom High School, she worked in Chicago for the Allis-Chalmers Corporation. Later, she had the opportunity to attend Bradley University where she was active in a Cappella choir and joined Chi Omega Sorority. After leaving Bradley, she worked for the District 150 School Board. She met Ben, a returning World War II veteran, at Bradley, and they were married on March 21, 1948.

Their children are Susan (Richard) Carlson of Robinson, IL, Ben (Wendy) Sommer of Marietta, GA, and Steve (Kim) Sommer of Geneva, IL. Her grandchildren are Diane Strange of Chattanooga, TN, Jeffrey Carlson of Dallas, TX, Benjamin Sommer IV and Hillary Sommer, both of Marietta, GA, and Brittany Sommer, Katlyn Sommer, and Alexa Sommer, all of Geneva, IL. She also has five great-grandchildren.

A grandson, David R. Sommer, passed away in 2014. Phoebe was also preceded in death by her parents.

Phoebe joined the First Methodist Church of Peoria where she was involved in many activities, including Chairman of Christmas Tree Lane in 1977. In later years, she joined the First Presbyterian Church of Peoria and was a member of the church choir. Her other interests included membership in P.E.O. Chapter G.S. and finding time to work for Republican causes, where she was chosen as the 89th Precinct Committee Man for four years. After her children began attending school, Phoebe became interested in Fine Arts and worked as a docent at Lakeview Museum. She joined the Fine Arts Society and served on their Board as Chairman.

She enjoyed camping and took many happy trips to Gulf Shores, AL, Crystal Lake, WI, and western National Parks with family and friends. After Ben retired, they spent the winter months in Naples, FL, living in Foxfire Golf and Country Club. She met many new friends and loved to play bridge, and she participated in golfing events. Phoebe became active in the Naples Garden Club and served as their Publicity Chairman, and then as their President for two years.

Phoebe learned from a family friend that her ancestors had lived on Manhattan Island in the sixteenth century and migrated up the Hudson River to the Mohawk River during the Pre-Revolution times. She and Ben took many trips to Herkimer, New York, Wisconsin, and Northern Illinois gathering information about her family during the American Revolution. She had enough material to apply and receive membership in the Daughters of the American Revolution. The Van Alstyne house of Canajoharie, New York in Revolution Times was called a Fort because of it's unique construction of brick and mortar. The house is still standing today, right along the Mohawk River.

Phoebe was most recently a faithful member of First Federated Church of Peoria and she served on their Worship-Music Committee. She was also a member of the Church Sunday Supper Club and the Church Women's Club, serving as the Chairman for two years. Recently, she retired to the Lutheran Hillside Village of Peoria, where she enjoyed many activities and made many new friends. She attended church services in both her home church, as well as Lutheran services in the Waters of Life Chapel at LHV. Her love of music inspired her to donate a new Rodgers organ to Lutheran Hillside Village, and it is a gift for the ages.

Memorial donations in honor of Phoebe may be made to First Federated Church or Lutheran Hillside Village Foundation.

Phoebe's online memorial website may be viewed at www.cumerford.com


To send flowers to the family or plant a tree in memory of Phoebe Marie Sommer, please visit our floral store.

To send flowers to the family in memory of Phoebe Sommer, please visit our flower store.