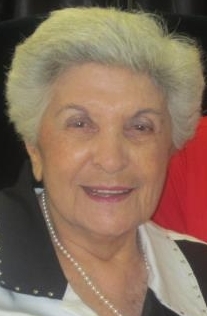 Mollie Idell Broms, 89, of Peoria, passed away at Methodist Medical Center at 4:17 p.m. on Wednesday, May 9, 2012, surrounded by her family.
Graveside services and interment will be at 1 p.m. on Friday, May 11, 2012, at Peoria Hebrew Cemetery, 2807 West Heading Avenue, with Bonnie Fenton officiating.
Mollie was born on August 18, 1922, to Joseph and Leona (Sherman) Wolk in Minneapolis, where she was raised with her brother, Milton Wolk, and four sisters, Florence Kivo, Dena Levine, Annie Shore and Estelle Arenson. They all preceded her in death. She met her late husband, Lee Broms, playing baseball in the streets of North Minneapolis.
She and Lee married in Minneapolis on March 15, 1942. They traveled to Peoria in 1949 with their two daughters, Sandra and Linda. Later that year, daughter Marilee was born and in 1956 they added son Jeff to the family. Lee preceded her in death on August 9, 2009 in Peoria.
Together, Mollie and Lee founded Lee Broms Furs and Fashions, one of Peoria’s landmark retail shops. She was a devoted wife and mother, as well as a respected businesswoman and community leader.
She was a member of the Agudas Achim Synagogue and of B’nai B’rith Women, where she served on the board and as its President for many years. As a member of Eastern Star, she devoted her time and energy to charitable, educational and fraternal interests. She was also actively involved in Altrusa International and Hadassah.
Mollie is survived by her four devoted children, Sande Bjergo of Eden Prairie, MN, Linda (Gil) Antokal of Deerfield, IL, Marilee (Scott) Sprenger of Peoria and Jeff Broms of Peoria; eleven grandchildren, Reed Bjergo, Angie Bjergo Lease, Staci Antokal Seed, Melissa Antokal Gumenick, Carrie Antokal Rizman, Joshua Sprenger, Marnie Sprenger, Liza Broms Iluzzi, Jeremy Broms, Hillary Broms and Joey Broms; and twelve great-grandchildren.
In lieu of flowers, memorial contributions may be made in Mollie’s memory to the Alzheimer’s Association Central Illinois Chapter, the American Heart Association or to the Peoria Hebrew Cemetery Association at 805 West Country Meadows Lane, Peoria, IL 61614.
The Broms family would like to thank Heartland Health Care Center of Peoria and Methodist Medical Center’s Emergency Room and ICU for their excellent care.
Arrangements have been entrusted to Clary Funeral Home, 3004 West Lake Avenue, in Peoria.


To send flowers to the family or plant a tree in memory of Mollie Broms, please visit our floral store.