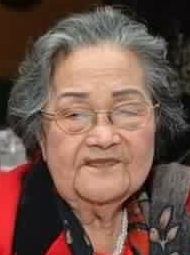 Lolita M. Carillo, 86, of Peoria, passed away on Monday, October 5, 2015, at OSF St. Francis Medical Center in Peoria.
Mass of Christian Burial will be at 10:30 a.m. on Saturday, October 10, 2015, at St. Joseph Catholic Church in Peoria, with Fr. Donald R. Henderson as celebrant. Visitation will be from 5 to 7 p.m. on Friday, October 9, 2015, at Clary Funeral Home, 3004 West Lake Avenue in Peoria, with Recitation of the Rosary at 4:30 p.m. Cremation rites will be accorded, following the Mass.
Lolita was born on October 31, 1928 in Calabanga, Camarines Sur, Philippines, a daughter of Pedro and Maria Medina. She married Antonio Carillo on November 3, 1942 in the Philippines. He preceded her in death, along with her parents; sons, Rodolfo, Junior and Jesus; daughter, Maria; and three grandchildren.
She is survived by her children, Segundina Magnaye, Elisa Caguitla, Hercules Carillo, Norma Timon, Lourdes Quinio, Purificacion Manimtim, Olympio Carillo and Rodel Carillo, all of the Philippines and Lucy Bender of Peoria; fifty-five grandchildren; and fifty-two great grandchildren.
Lolita was a parishioner at St. Joseph Catholic Church in Peoria and was a member of the Filipino-American Society of Central Illinois, where she was a past recipient of their Senior Award.
She enjoyed spending time with her friends and family, going on religious trips, attending Mass, collecting Rosaries and church memorabilia, singing, sewing, gardening, cooking and watching Filipino television. She was very loving, caring and hardworking.


To send flowers to the family or plant a tree in memory of Lolita Carillo, please visit our floral store.