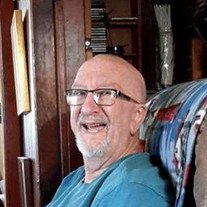 Llewellyn "Biff" Barry Jr., 64, of Peoria passed away peacefully at his home on March 13, 2016.
Llewellyn Jr was born to Llewellyn Sr and Doris (Anderholm) Barry on August 11, 1951 in Fitchburg, MA. He married Susan C. Fipps on November 5, 1988. Biff is survived by his wife Susan C. Fipps of Peoria, sisters; Pamela Barry of Hudson, NH, and Kristen (Mark) Miller of Ft. Wayne, IN, son; Andrew Barry of Peoria, daughter; Elizabeth (Alexander) Ifft of Peoria Heights, cousin; Karen (Steve) Lehnhausen of Edwards, IL, and one grand-daughter; Justine Barry.
Biff was a member of the St. Thomas the Apostle Church in Peoria Heights. He graduated from Natick High School in 1969, and Hartwick College in Oneonta, NY in 1973. Biff was the owner of Pipe Dreams Smoke Shoppe in Peoria. He then spent over 20 years working as a program assistant and cook for the Apostolic Christian Home for the Handicapped. In his free time, Biff enjoyed cooking for the Irish Society and cooking chili competitively. He enjoyed collecting pipes, and most of all, he enjoyed reading to his grand-daughter Justine.
A funeral service for Biff will be held at 12:00 pm on Friday March 18, 2016 at Cumerford-Hurd Funeral Home in Peoria, IL. A visitation will be held two hours prior. Cremation to follow.
Memorial contributions for Biff may be made to T.A.P.S (Tazewell Animal Protective Society) in Pekin, IL.
Biffs online memorial may be viewed at www.Cumerford.com


To send flowers to the family or plant a tree in memory of Llewellyn Bickford Barry, please visit our floral store.

To send flowers to the family in memory of Llewellyn Barry, please visit our flower store.