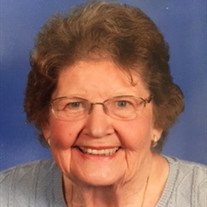 Joan graduated from Woodruff High School in 1948 and was a homemaker. She enjoyed RVing with her husband and adored her grandchildren. Joan was a member of First United Methodist Church in Peoria where she was also a member of the Harvester Class.

She was preceded in death by her parents, husband, brother, Fred Mehlenbeck, and sister-in-law, Nina Barnhart.

Cremation rites have been accorded and a memorial service for Joan will be held at 11:00am on Saturday, September 5, 2015 at First United Methodist Church, 116 NE Perry Avenue in Peoria. Visitation will begin at 9:30am at the church. Interment will be at Swan Lake Memory Gardens at a later date.

Memorials in honor of Joan may be made to South Side Mission or her church.

Joan's online memorial website may be viewed at www.cumerford.com


To send flowers to the family or plant a tree in memory of Joan Virginia Speirs, please visit our floral store.

To send flowers to the family in memory of Joan Speirs, please visit our flower store.