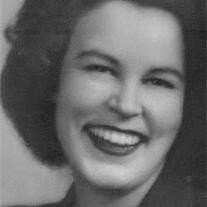 She was born April 21, 1926 in Smithfield, IL the daughter of Elmer Ambrose and Calla (Pickering) Foote. She married Linwood L. Shepperd August 1, 1946 in Peoria Heights, IL.

She volunteered for the Special Olympics and enjoyed reading, camping.

Cremation rites have been accorded. Visitation will be held 5-7:00pm on Tuesday, May 29 at Cumerford-Hurd Funeral Home 428 W. McClure Ave, Peoria and a memorial service will be held at 10:30am on Wednesday, May 30, 2012 at the funeral home. The Rev. Raymond Harrison will officiate. Inurnment will be in Lutheran Cemetery. Online condolences may be made to the family at www.cumerford.com

To send flowers to the family or plant a tree in memory of Helen F Shepperd, please visit our floral store.

To send flowers to the family in memory of Helen Shepperd, please visit our flower store.