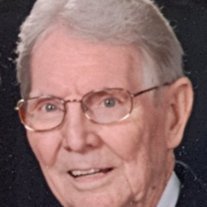 Dale E. Anderson, of Peoria, died, February 20, 2013 at 7:19 AM, at Heartland Health Care of Peoria.
He was born September 15, 1925 in Galva, Il to Oscar and Clara Anderson. He married Shirley French on January 18, 1948 at the Little Brown Church in Nashua, Iowa. She survives.
He is survived by his daughters, Cheryl (Larry) Hughes of Portsmouth, New Hampshire and Caryl Schierer of Galva, Illinois. One granddaughter Alysia (Johnathan) Wangelin of Galva. Two grandsons, James and Jason Rosensteel and four great grandchildren.
He was of the Methodist Faith, and was a member at First United Methodist Church in Peoria.
Dale served in the Army in Europe during World War Two, and was the recipient of two Bronze Star Medals.
He graduated from Iowa State University with a Bachelor of Science in Industrial Administration.
Dale was a member of Galva Lodge 243, AF&AM, a Life Member of Scottish Rite Bodies, Valley of Peoria, Mohammed Shrine, American Legion Post 45, and The Veterans of Foreign Wars Post 15014, and the Peoria Lions Club. He was active in the Republican Party as a member of the Peoria County Republican Central Committee. He was a founding member of the Lake Calhoun Golf Course near LaFayette, Il. He also served on the Kewanee Chamber of Commerce committee that organized the "Hog Capital of the World" Festival.
Cremation rites have been accorded. Services for Dale will be held at Cumerford - Hurd Funeral Home Monday, February, 25, 2013 at 10 AM with Pastors Bob Phillips and Richard Hanson officiating. Visitation will be Sunday February 24, 2013 at Cumerford - Hurd Funeral Home from 3 - 5 PM.
Memorial donations may be made to First United Methodist Church and The Peoria Lions Club. Online condolences may be left for the family at www.hurdfamilyfunerals.com


To send flowers to the family or plant a tree in memory of Dale E. Anderson, please visit our floral store.

To send flowers to the family in memory of Dale Anderson, please visit our flower store.