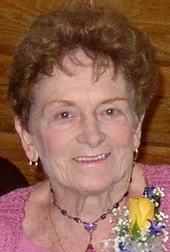 Claire Neff Hutchison of Peoria, formerly of Springfield, passed away peacefully on Saturday morning, March 31, 2012, at her home.
Mass of Christian Burial, celebrating her life, will be held at 10 a.m. on Saturday, April 14, 2012, at St. Ann Catholic Church in Peoria, with Fr. Terry Cassidy as celebrant. Visitation will be from 4 to 6 p.m. on Friday, April 13, 2012, also at the church, with a Vigil Prayer Service at 3:45 p.m. Interment will be at St. Mary Cemetery in West Peoria. Memorial contributions may be made in Claire’s memory to St. Ann Catholic Church.
Born Elizabeth Claire Neff in Chicago, she was the daughter of Clarence and Margaret (Delaney) Neff.  She married her husband of 28 years, Karl William Hutchison, on September 11, 1948.
Claire attended The Faulkner School in Chicago and graduated from DePauw University in 1948. She continued on a path of lifelong learning, adding a Master’s Degree in Counseling from Sangamon State University in 1974, and two Master’s Degrees from Bradley University.
She complemented her formal education by including a year of teaching English at Szechuan University in Chengdu, China in 1997.
After raising seven children, Claire continued to contribute to the community in her work with the City of Peoria Private Industry Council and by owning and operating a vocational school, Careers in Hospitality, on Main Street in Peoria for over ten years.
Claire was a devout Catholic, an ecumenical minister and was active in Cursillo for more than thirty years.
Claire was a member of the National Association of Women Business Owners and held multiple leadership positions on the Illinois State Board of Directors for ARC of Illinois, advocating for persons with disabilities, and continued her leadership with PARC for many more years.
Claire loved the golf course as much or more than books, being an avid reader, who played golf even in the last year of her life. She was a member of many clubs including Bible Study, Prayer Group, Golf Club, Red Hat Club, and perhaps her favorite, Bridge Club.
She is survived by her children, Pearl Foster of Spokane, WA, William (Ivy) Hutchison of Bloomington, Larry (Grace) Hutchison of Thousand Oaks, CA, Robert (Karen) Hutchison of Emmaus, PA, John C. Lake of Brooklyn, NY and Liz (Rick) Boudreau of Groveland; and ten grandchildren.
Claire was preceded in death by her brothers, Jerry and John Neff, and her son Daniel.
Funeral arrangements have been entrusted to Clary Funeral Home, 3004 West Lake Avenue, in Peoria.


To send flowers to the family or plant a tree in memory of Claire Hutchison, please visit our floral store.