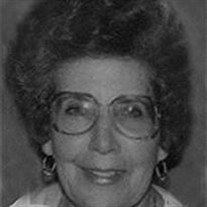 She was preceded in death by her parents, husband, two sons, David Knoblett and Don Knoblett, and her adoptive brother, Bob Thomas.

Betty had a great love for gardening and being a grandma. She was also a skilled seamstress, a member of both Illinois Bell Retirees and OSF Senior Saints, and volunteered for many years at The Alliance for Mentally Ill.

A visitation will be held on Friday, January 23, 2015 from 4:00-6:00pm at Cumerford-Hurd Funeral Home, 428 West McClure Avenue in Peoria. Cremation rites will be accorded and a private family graveside service will be held at Swan Lake Memory Garden.

Memorial donations in honor of Betty may be made to National Alliance on Mental Illness.

Betty's online memorial website may be viewed at www.hurdfamilyfunerals.com


To send flowers to the family or plant a tree in memory of Betty M. Knoblett, please visit our floral store.

To send flowers to the family in memory of Betty Knoblett, please visit our flower store.