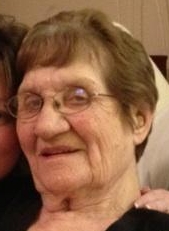 Bertha Mae Trulock, 82, of Pekin, formerly of Peoria, passed away at 1 p.m. on Sunday, April 8, 2012, at Morton Villa Care Center.
Funeral services will be at noon on Thursday, April 12, 2012, at Clary Funeral Home, 3004 West Lake Avenue in Peoria, with OSF Hospice Chaplain Chuck Wilcox officiating. Visitation will be one hour prior to services at the funeral home. Interment will be at Springdale Cemetery in Peoria.
Bertha was born in Glasgow, KY on January 10, 1930, a daughter of Fred J. and Luvinna (Oliver) Jolly. She married Donald F. Trulock on August 29, 1947 in Peoria. He preceded her in death on November 23, 1985 in Peoria. She was also preceded in death by a son, Tom Trulock, her parents, five brothers and three sisters.
She is survived by her son, Raymond Lee “Bud” Trulock of Marquette Heights; daughters, Georgia Mae (Richard) Lovell of Alvaton, KY and Donna Jean (Dan) Painter of Marquette Heights; sister, Hazel (Walter) Robinson of Glasgow; brother, Robert (Ruth) Jolly of Edmonton, KY; five grand children; five great grandchildren; and a step-daughter, Carol (Rick) Craig of Washington.
Bertha was a homemaker and formerly attended Morgan Street Baptist Church in Peoria.
Memorial contributions may be made in Bertha’s memory to the American Cancer Society’s Road to Recovery Program in Peoria.


To send flowers to the family or plant a tree in memory of Bertha Trulock, please visit our floral store.